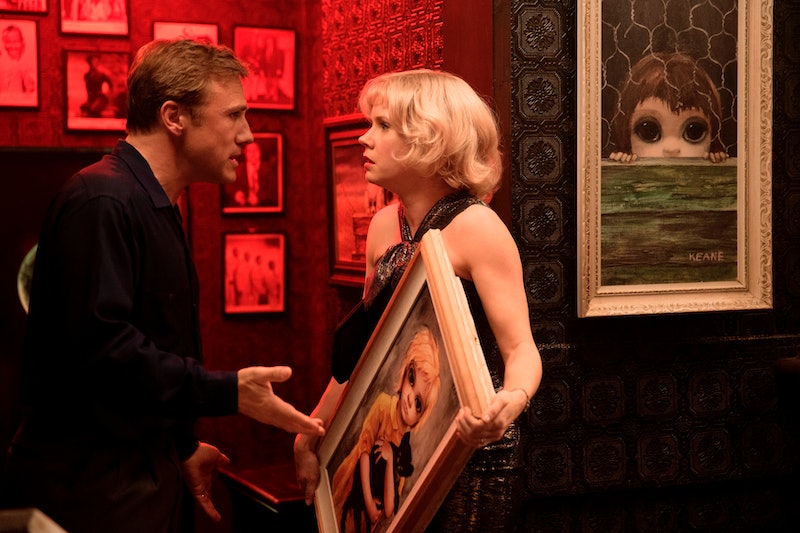 In Amy Adams' latest film Big Eyes (in theaters Dec. 25), she portrays Margaret Keane, an artist who was psychologically abused by her husband, Walter, as he forced her to let him take credit for her paintings. As he rose to fame, she sat in a closet and created work for him, trapped in a terrible situation for a decade — until she decided to break free. The Tim Burton-directed movie is based on the true story of the two artists, and during a press conference for the film on Friday, Bustle asked Adams whether she considers Margaret as a feminist for not only walking out on her first husband, but later coming out with the truth about Walter in the '60s when women standing up for themselves was not the norm.

"I wouldn't know about Margaret. She wasn’t a part of like, movements, do you know what I mean? She was was just sort of — as she puts it — ‘Well, I was in a closet making paintings.’ I like the way that [screenwriters] Larry [Karaszewski] and Scott [Alexander] brought that into the movie, because I do think whether intentional or not, she did do something that was very much of the moment in standing up for herself. And I do like that sort of coincided with such a great push in the feminist movement. But I’m not sure that Margaret was aware that she was doing it for that purpose, to be a voice for all women. She was really probably doing it to be a voice for Jehovah and for truth."

There is one definite feminist in the film, though. Krysten Ritter — who plays Margaret's outspoken friend DeeAnn and is pictured below — explained, "I think DeeAnn has her own identity and she speaks up about it, and she wants to stand up for Margaret. So I think she’s absolutely a feminist."

When it comes to the abusive relationship, Adams explained to journalists during the panel that she didn't want Margaret to seem like a victim. Instead, she took ownership for the situation (albeit a terrible one), appreciated her success, and moved on from her crazy fraud of an ex-husband.

"I think that it’s very common, unfortunately, part of psychological abusive relationships is very isolating and very controlling and very soon you feel complicit to whatever that abuse is. And in this case, it was a lie which she chose to be a part of. I believe she, even to this day, gives Walter credit, saying, ‘I wouldn’t be known [as an artist] if it weren’t for him, and he was a genius at what he did. And I would have never had the following that I have today.’ The thing that I liked about Margaret and what I thought kept her from playing a victim — because I didn’t want her to feel like a victim — was when you talk to her, she does still take credit and responsibility. She feels guilty that Walter ended up the way he did. She’s like, ‘Maybe if I didn’t lie, he would not have turned out like he did. That poor character...’ She feels badly, and I liked her sense of ownership in the deception."

When it comes to intertwining her own life and family with the film, it was seamless. As an actress, Adams says that she struggles to juggle her parenting lifestyle with her artist lifestyle every day, and it made playing Margaret and her daughter Jane's dynamic that much more interesting.

"[Margaret being a mother] actually played a great deal into my interest in the film. I think I read it before I was a mom and I saw Margaret one way, and then after I had my daughter and had been a mom for about four years, I saw her in a total different way. I sort of understood this flawed parent, you know, because I definitely feel like one. Being an artist and being a mom sometimes keeps you at odds, and not to say you can’t do it, but an artist life can feel very isolating and very narcissistic, and being a parent needs to be something completely different. So I understood that sort of thing in trying to make the right decisions and then getting caught in a lie with your child. That was something that I found very fascinating and I was really interested by that dynamic."

All in all, Adams was a perfect fit for Margaret, and she knew it from the beginning. After hearing about the project, she emailed director Tim Burton to try to get the part, and the story was as sweet as you can imagine.

"I’ve been wanting to work with Tim like forever, since I could think about being an actress. And like Margaret, I’m not a really great self promotion expert. Mostly I just stutter when I meet people I want to work with, and luckily that worked with Tim! I wrote him a letter when I heard about this and that it was coming back around. I sent him an email expressing my wishes to be involved. And it was awesome. I was one of the most relaxed — I was so relaxed on set, which I don’t think I should have been, but I felt like I was part of something bigger than just what I was playing."