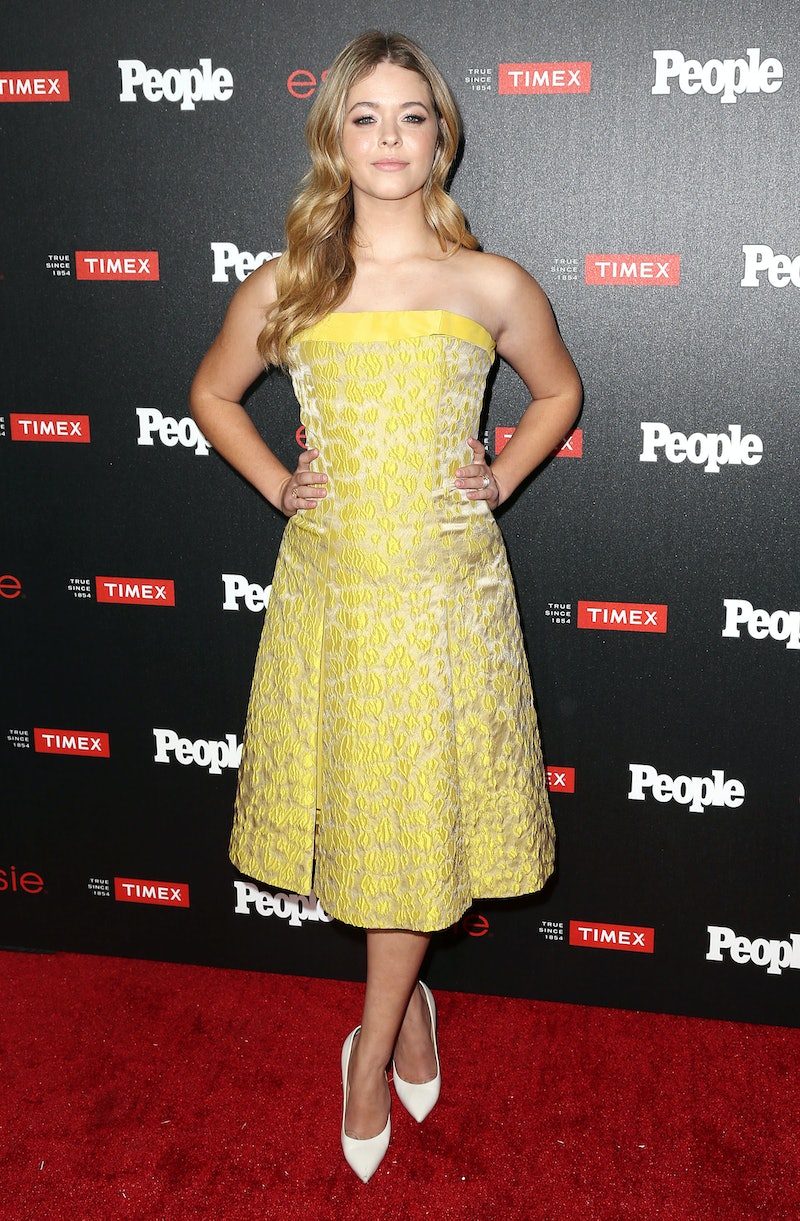 I spend entirely too much time theorizing about Pretty Little Liars, and as much as I adore this show (and believe me, I adore it) it frustrates me to no end. The second I think I have even the slightest part of the unfolding mystery solved, the show circles back and reminds me that, no, I actually know nothing. Let's take the Pretty Little Liars holiday special "How The A Stole Christmas" as an example. I was positive that the episode would confirm some of my suspicions about Bethany Young, the dead girl who wound up in Alison DiLaurentis' grave. Instead, the episode only made me more puzzled about the true nature of the relationship between Alison and Bethany — and whether the girl in Ali's grave might be a red herring after all. And it's all thanks to a couple of yellow dresses on the PLL Christmas special.

One particularly confusing scene from the holiday episode was actually a flashback — brought on by Ghost of Christmas Past Mona. And in true Christmas fashion, it had to do with two identical gifts. Young Ali's discovery of two yellow dresses underneath the lid of her piano — and her mother's insistence that she not tell her father about them, for fear that he would leave the family — set off red flags for both viewers and Ali herself. When Ali asked ghostly Mona whether the other yellow dress was for Bethany, Mona told Ali that it wouldn't be "that easy, bitch" — which is not exactly the answer that viewers were looking for. Because as much as it seems obvious that the other yellow dress was for the daughter of the man that Mrs. DiLaurentis was having a longterm affair with, Mona's bitter reply gave fans some pause. If that dress isn't for Bethany, well, then, who was it actually for?

The short answer? I have absolutely no idea. The better answer? I do have my suspicions that there may be more to the two dresses than even Ali knows. The show loves to play with doubles, and while fans had suspicions that the dresses were for Bethany and Ali, what if one dress wasn't actually for Ali at all? What if one dress wasn't for Ali but for Bethany's identical twin sister?

Tammin Sursok, the actress who plays Jenna, hinted that one of the characters on the show will have a twin. Sure, Bethany's not exactly a "character" on the show — she's been dead since the pilot — but she is talked about enough to count. We know that Bethany looked a lot like Ali — enough for the coroner's office to assume it as her body in that grave — which means that Bethany's twin would probably look a lot like Alison as well. That means that there could be yet another demented blonde running around Rosewood — possibly as A. What if Bethany's twin was out to get Ali this whole time for murdering her sister?

Of course, Bethany's sister might not be out for revenge at all. There's also the chance that Bethany's sister is equally as awful as Ali — possibly so much so that she is the one responsible for the murder of her own sibling. I keep coming back to the Halloween episode where Ashley Marin meets the little girl ghost was was allegedly killed by her own sister over a doll — could it be foreshadowing to a situation in which Bethany was killed by her own twin?

Yes, the theory is farfetched — especially considering that I'm basing it off of the presence of two yellow dresses under a piano box — but considering that this is PLL, I wouldn't put it past the writers to pull out a major twist like this on us sometime over the next two seasons. And until we find out the truth about Bethany, Ali, and the entire Rosewood mystery, I won't stop theorizing about all of the possibilities.