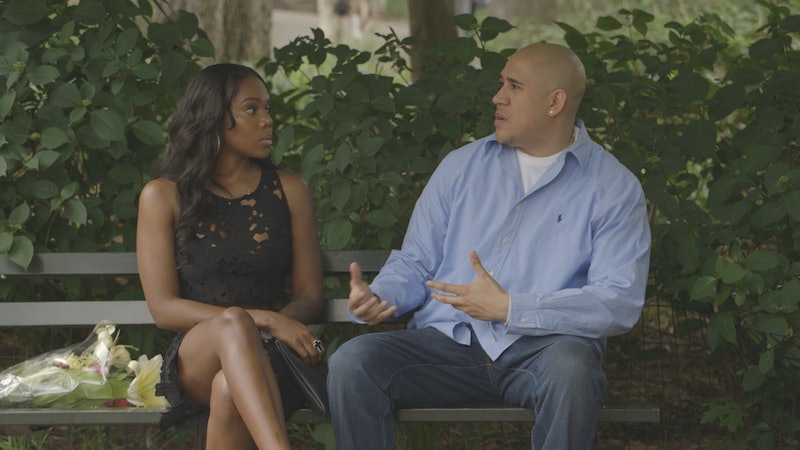 One of the newest cast members on VH1's Love & Hip Hop , Diamond Strawberry, has a name you won't mix up with anyone else on the show. Why not? She has an actual diamond implanted in the side of her face, which should remind you of her first name every time you see her. The L.A. native relocated to New York this year to further her modeling career and be closer to her long-distance boyfriend, Cisco Rosado (a hip hop producer who's appeared on the show since Season 3). It's too bad Diamond couldn't somehow see the future trailer for Love & Hip Hop before moving across the future, because it's clear that there's major trouble for the couple on the horizon.

Diamond herself has teased that things will get a little ugly, and even turn violent at some point this season on Love & Hip Hop. But she also insists that she's a really sweet person, even when she appears to not exactly be behaving so sweetly. Check out what else Diamond has to say about Love & Hip Hop Season 5 in the promo video below to get an idea of what we can expect from one of the series' new additions.

There's much more to learn about this new cast member before the season premiere on Dec. 15.

Though she hasn't hit the big time yet, Diamond knows what it's like to be in the spotlight, because she's the daughter of controversial former pro baseball player Darryl Strawberry. Strawberry is four-time World Series champion and 1984's Rookie of the Year. Unfortunately, he also had a series of arrests during and after his time in the majors. Diamond says all the negative media attention surrounding her father made her mother very protective of her, so Diamond is using her move to New York as a way to escape her sheltered life.

Can She and Cisco Make is Work?

Based on this extended preview, it doesn't look good. And that's probably excellent news for Diamond. Yes, breakups are hard, but staying in a relationship that isn't right for you is way worse. This could be Diamond's opportunity to focus on herself and her career. If she needs advice on how to break up, I believe Beyoncé has a tutorial she could follow:

What to Expect this Season

The newest addition to Love & Hip Hop promises "on this season you'll see boobs out..." so stay tuned for that. Oh, and her inevitable huge fight with Cisco. Hopefully, by the end of Season 5, Diamond will be happy in her personal life and further along in her career. To see what actually happens, we'll just have to watch.