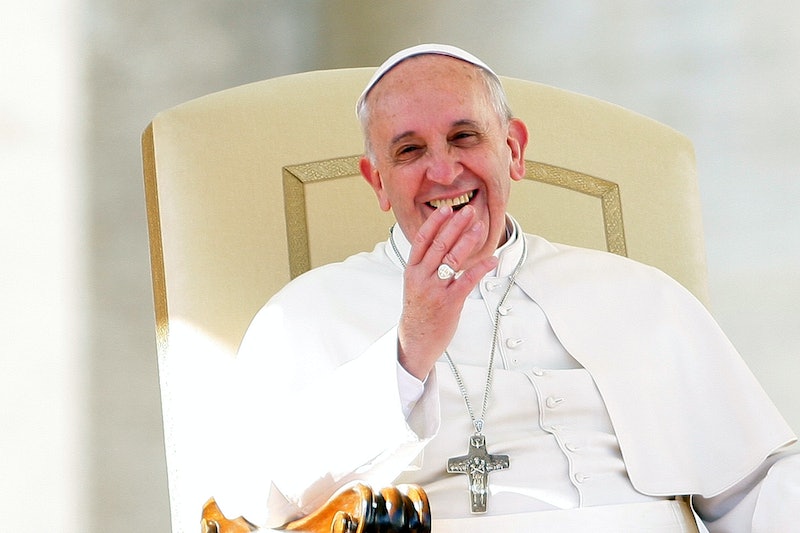 If you have a beloved pet that's passed on — I certainly do — you might take some comfort in this bit of news. In his weekly address to an audience in St. Peter's Square, Pope Francis said all animals go to heaven. To animal lovers, this comes as little to no surprise, because we more or less knew that already. But it's nice to get some confirmation.

Huffington Post translated a portion of his speech from an Italian newspaper:

Paradise is open to all creatures, and there we will be vested with the joy and love of God, without limits.

Excuse me, I think I have something in my eye. Granted the pope was not speaking ex cathedra, which is to say that he was not using his papal infallibility to communicate directly with God, but coming from a major religious leader it is still a pretty meaningful statement.

Sarah Withrow King, director of Christian outreach and engagement at PETA, responded to the pope's words via the The New York Times:

Pope Francis is not the fist pope to touch on animals in the afterlife. Despite being a cat lover, his predecessor, Pope Benedict XVI, said he did not believe animals go to heaven. Benedict's predecessor Pope John Paul II, however, said he did. Interesting.

Whether you identify as a Catholic or do not, believe in heaven or don't, the debate over how much personhood one can logically give an animal is an important one to have. How we view and treat animals has long been a controversial topic in our world. Many people believe animals are worthy of respect, and therefore there are thousands of animal advocacy groups and charities focused solely on protecting animal welfare around the globe.

Personally, I was raised Catholic, but I am not particularly religious anymore. Even so, I still appreciate Pope Francis' willingness to speak out in favor of animals. If believing animals can go to heaven will help people take better care of their pets, and treat wild animals with respect, then I am all for it.

Besides, it's kind of a nice thought to know my childhood dog could be flying around somewhere with angel wings, a harp, and all the Beggin' Strips she could ever possibly want.

More like this
This Is When Netflix Is Going To Start Charging You For Sharing Passwords
By Darshita Goyal
6 Organizations Fighting Police Brutality That You Can Support Right Now
By Syeda Khaula Saad and JR Thorpe
Watch Jacinda Arden’s Devastatingly Honest Resignation Speech
By Sam Ramsden
Picky Eater? Sensitive Stomach? This Vet Nutritionist-Designed Dog Food Has A Plan For That
By Maria Cassano
Get Even More From Bustle — Sign Up For The Newsletter
From hair trends to relationship advice, our daily newsletter has everything you need to sound like a person who’s on TikTok, even if you aren’t.