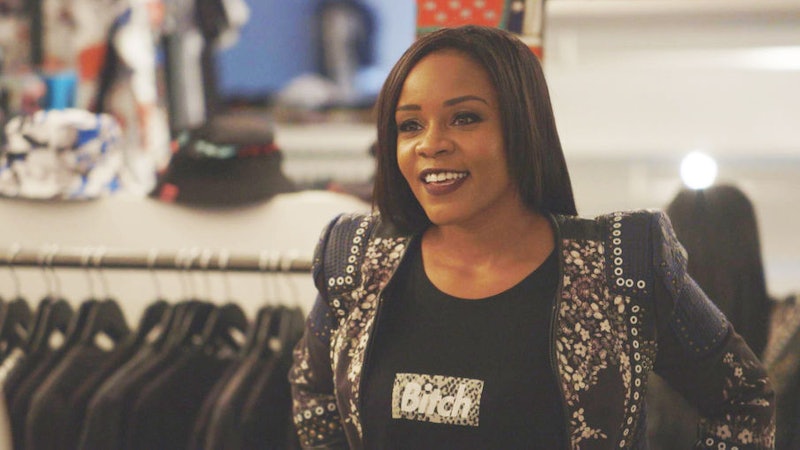 Love & Hip Hop usually features plenty of the "love" described in the show's title — mostly in the form of drama between the various divas in the cast and their boyfriends. As a welcome change in Season 5, we'll also be getting even more of the "hip hop," courtesy of Love & Hip Hop 's newest addition: Precious Paris. (And yes, that's her legal name.) Many of the women on this show are wives or girlfriends of music producers or artists, so it's exciting to see a female who's in the business herself make it into the cast. Even better: Precious isn't attached to a romantic relationship, so her storyline will (hopefully) focus on her career. Which, by the way, is about to blow up.

The first thing to know about Precious is that, before leaving this year, she was the only woman signed to G-Unit, 50 Cent's record label, which also features Lloyd Banks and Tony Yayo. (She's now working with Rich Dollaz' Dollaz Unlimited label.) The girl can rap. Did I mention how great it is that a female artists is on Love & Hip Hop this season? Yeah, it's pretty great. Watch Precious describe her experience on the show in the video below.

What else should you know about the rapper before Love & Hip Hop Season 5 premiers Dec. 15?

Unlike some of her castmates, Precious did not come from wealth or fame. She grew up in Jamaica, Queens, in what she describes as a neighborhood she "so desperately wanted to get out of." So she worked her butt off perfecting her writing and rap skills, and ended up signed to a huge hip hop label. She stills reps Jamaica hard though. Now that Precious and G-Unit have parted ways and she's working with a new producing partner, she's fighting even harder to make a name for herself in rap.

Check Out Her Music

Following in the footsteps of Eve, MC Lyte, Lil Kim, and other female rappers, Precious Paris is determined to carve out a place for her music in the boys' club of hip hop. It's not an easy challenge, but the artist definitely has the lyrical skills and the flow to succeed. In fact, she just released a new single, "Times Up," at the end of October. Now that she's on Love & Hip Hop, her music is being exposed to a whole new audience. It's only a matter of time before she goes mainstream.

What to Expect this Season

Precious is now working with producer Rich Dollaz (whether they'll make lots of dollaz together remains to be seen). As you probably saw from her VH1 promo, Precious is a little leery of Rich's side projects. And their relationship becomes even more strained when Rich starts working with another female rapper. Sharing the spotlight is not a part of Precious' plan this season. Whether she drops Rich or sticks by him, we'll just have to watch to find out.

More like this
Kanye West Apologizes To Kim K "For Any Stress I Have Caused" In Rare Interview
By Jake Viswanath
Adam Levine Denies Having An Affair — But Admits He “Crossed The Line”
By Jake Viswanath and Radhika Menon
Looks Like She Made It
By Lindsay Zoladz, Beau Grealy and Tiffany Reid
How Ghosts Inspired Kesha's New Music
By Jake Viswanath
Get Even More From Bustle — Sign Up For The Newsletter