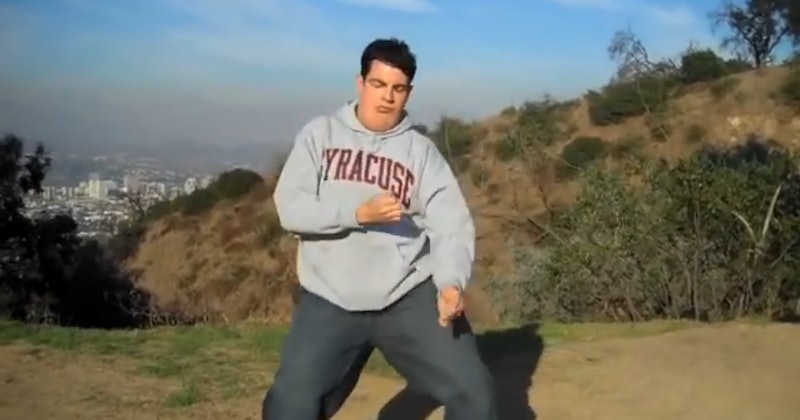 Downtime at work can make the world feel like a hopeless place. There's only so much napping, doodling, or gossiping at the water cooler you can do before either succumbing to boredom or the death glare from an angry boss who observes the shameless slacking. But none of those menial past times matter to creative types like New Girl's Max Greenfield, who apparently spends his extra time on set filming himself in full Fat Schmidt costume, lip syncing to Rihanna.

Luckily for Greenfield, this video of Schmidt turning up to Rih Rih's "We Found Love" is beyond amazing, so it's doubtful that he'll receive any stern warnings or pink slips from the big wigs. Besides, the statute of limitations for goofing off on the clock has probably expired by now because, unbelievably, this video has been on Greenfield's YouTube channel for the past three years. It's virtually gone unnoticed, that is, until New Girl's co-star Zooey Deschanel shared it on her site, Hello Giggles.

If anything, Greenfield should get a huge pat on the back and possibly a pay raise for making innovative, effective use of his time while in character. I mean, there's something to be said about the way he pulls off this original choreography, which looks like a combination of hip-hop aerobics, voguing and Zumba. On top of that, he performs his precise dance moves while wearing a Syracuse sweatshirt and jeans, which isn't exactly a dance-friendly ensemble.

At a few points in the video, it appears that Schmidt doesn't know all the words to "We Found Love" (gasp!) because he constantly glances off camera at what I suppose is a computer screen displaying the lyrics. But I won't hold that against him simply because watching him give his all to a Rihanna performance on a sunny hillside involves more hilarity than anyone could ask for.

Check out Greenfield transform into a full-fledged, Rihanna-loving Schmidt below: