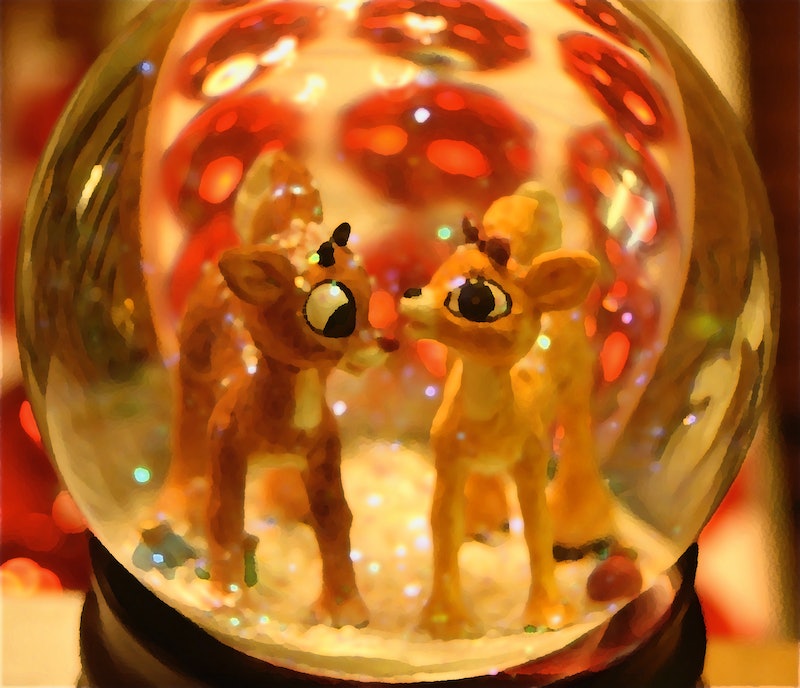 One of the best things about the holidays is that it's socially acceptable to watch children's movies all season long. Not that I would refrain from watching The Muppet Christmas Carol anyway, but I like that I don't have to justify my juvenile movie picks to anyone... because they're just as stoked about watching them as me. Of course, the most classic of all kids Christmas flicks are the stop-motion animation specials created by Rankin/Bass Productions. Everybody loves Rudolph the Red-Nosed Reindeer — even my 3-year-old niece can't get enough of this old-school gem, which turned 50 this year. (Happy birthday, Rudolph!)

Rudolph's half-century milestone reminded me of all the other claymation specials I love, and the random life lessons they've taught me during my yearly viewings. Outdated as they may be, these weird little movies have some surprisingly heartwarming messages. There’s a scene in the (totally underrated) Jack Frost special from 1979 that actually makes me choke up because it’s so frickin' adorable — more on that later.

Ready to get in the Christmas spirit? Here are nine life lessons to be gleaned from claymation classics:

This is basically what all of Rudolph is about. Whether you're an elf who wants to be a dentist or a reindeer with a Christmas light for a nose, know that it's OK to be a misfit. Even though Santa and Rudolph's parents are total jerks to him at first by making him cover his shiny nose with a weird brown cap that gives him a slight speech impediment, they come around after he runs away and later saves Christmas. Take that, haters!

2. Appreciate what you have

The poor townspeople of January Junction don't have much, but that doesn't stop them from having a merry Christmas. Seriously, in this scene they're passing around an empty box and are still having the best time ever because they're with friends and family. I can't help it — this scene just gets to me. Surround yourself with good people, and you won't care about owning fancy things.

First, let's acknowledge how badass Mrs. Claus is in The Year Without a Santa Claus... I respect her take-charge attitude. She forces the Heat Miser and Snow Miser to strike a deal with the help of good old Mother Nature. Sometimes, you've just got to put your differences aside for the common good.

4. Don't be afraid of change

In Santa Claus Is Comin' to Town, Kris helps the Winter Warlock become good with his ever-inspiring tune "Put One Foot in Front of the Other." It can be scary to try new things, but just follow Kris' advice and take it one step at a time. It'll all be good.

5. Always help a friend in need

Hermey and Yukon Cornelius really do Rudolph a solid. When Rudolph is knocked out by the Abominable Snow Monster (who has captured his family), his pals have his back. We should all aspire to be as loyal as these dudes.

6. In fact, you should help anyone in need

Have you seen Nestor the Long-Eared Christmas Donkey before? Well don't worry if you haven't. It's basically Rudolph but with a donkey and more religion. Anyway, poor outcast Nestor guides Mary and Joseph through a snowstorm (and wraps Mary in his long ears to keep her warm, obvi) to help them find shelter. Oh yeah, and then Jesus is born. Talk about a good Samaritan.

7. Being a human isn't so easy

If I were a winter sprite, no way would I want to become a human. But Jack is quite the romantic and wants to woo a pretty girl named Elisa, so he gives up his powers for humanity. In the end he becomes a sprite again to create a giant blizzard and stop the king on Miserable Mountain, and Elisa falls in love with some generic knight in shining armor. Moral of the story? Things don't always go your way, but keep your chin up and carry on.

8. When people suck, just hang out with animals instead

Everyone is really mean to this orphan Aaron in The Little Drummer Boy. He copes by playing his drum and hanging out with his three best friends: a donkey, a sheep, and a camel. I'm actually pretty jealous of his companions... all I have is a cat.

9. But really, just be nice to everybody

In all of these Christmas specials somebody is being teased or treated unfairly. Just let everyone join in the reindeer games, guys! The end.