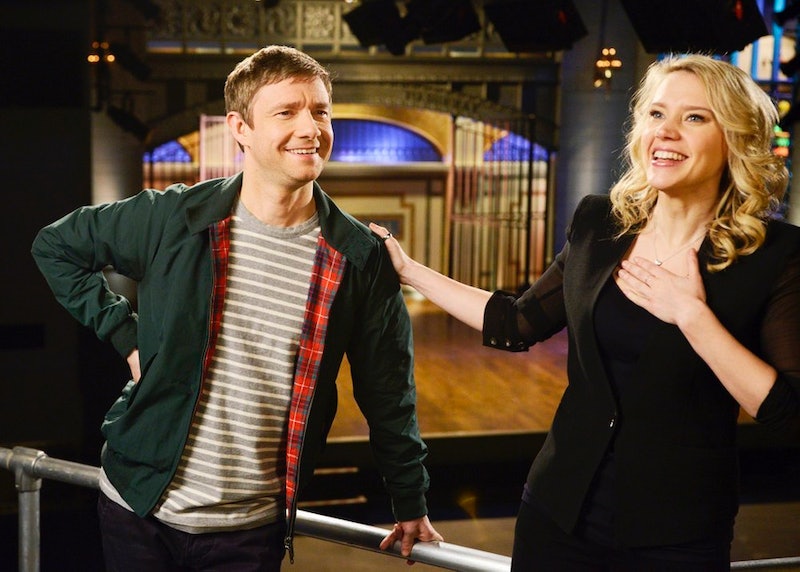 Television is pretty blah right now, as there are few shows that are airing new episodes. But while some of your favorite shows have abandoned you to watch reruns of Tosh.0, Saturday Night Live is still going strong with two new episodes to air before the holiday hiatus. Up first hosting Saturday Night Live is Sherlock star Martin Freeman. Freeman, who is promoting the upcoming Hobbit movie, welcomed some very famous faces — Maggie Smith and Alan Rickman — to the stage during his monologue Saturday night... If you count Kate McKinnon and Taran Killam in costume as the real things.

In recent episodes, hosts have brought out co-stars, friends (see Seth Rogen helping out James Franco's monologue last week), and downright huge stars (I'm lookin' at you J. Law on Woody Harrelson's episode). And let's all be honest with each other, if there was one "co-star, friend, and huge star" that we wanted to see, it was Benedict Cumberbatch, Freeman's Sherlock other-half. But that's a tall order, so McKinnon and Killam's impressions of the Harry Potter alumni was equally satisfying.

Freeman's joke throughout the monologue was that all British celebrities know each other, and hang out with each other. To prove the point, Maggie Smith (McKinnon) enters saying she and Freeman split a bunk bed, with Freeman and Snape — er, Alan Rickman — sharing the bottom bed, where they stay up all night giggling. I'm gathering that Freeman was insinuating that not all British people know each other, and they don't have celebrity sleepovers across the pond — which is a major buzzkill — I guess that's just more of a U.S./Taylor Swift thing?

On a final note, Freeman reintroduced himself to the audience, saying he was Martin Freeman, unless he embarrasses himself, in which he is Colin Firth. So just remember that if things go south.