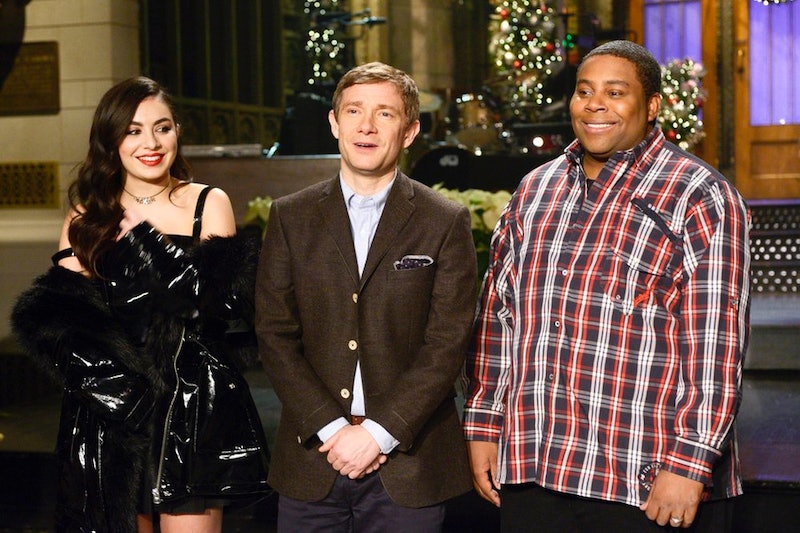 Maybe I'm just ignorant, but I had no idea what to expect from Charli XCX's Saturday Night Live debut. How was she — they? — going to be live? Was there going to be enough excitement in the crowd to keep the energy up? We love her in "Fancy," and obviously "Boom Clap" is on repeat at every function I've attended since June, but what was to happen on SNL? Well, after the British singer performed her two sets on Saturday night, I can confidently say that Charli XCX performed the hell out of her numbers.

First, Charli XCX performed the very popular "Boom Clap," to an extremely receptive audience. All of the previous qualms were swept away once she started singing, because guys, she was really great! I don't know if she was singing 100% live or not, but I didn't really care. How can you not sing along to the chorus of that song with a ton of enthusiasm, then remember it from The Fault In Our Stars and feel weird about your excitement?

The second song Charli XCX performed was "Break The Rules," which should absolutely be your anthem for whenever you don't want to do something and rebel against life (so Mondays, really). During the instrumental moments of the song — and there were a lot, or maybe I just noticed them extra because of what follows — Charli XCX got down with her funky self and danced like no one was watching. Honestly, she gave VMAs Miley a run for her money, and I didn't hate it. When you're singing a song about breaking the rules, you can't just calmly stand at the microphone and sing the lyrics. You've got to feel the music, and that is exactly what Charli XCX did.

"Break The Rules" is on Charli XCX's upcoming album Sucker, expected to be released Dec. 15.

More like this
‘SNL’ Finally Spoofed Nicole Kidman’s Weirdly Beloved AMC Ad & Nailed It
By Stephanie Topacio Long
Everything To Know About Taylor Swift’s 10th Studio Album, 'Midnights'
By Grace Wehniainen and Jake Viswanath
Beyoncé’s Special Tribute To Sister Solange Was Both Touching & Hilarious
By Stephanie Topacio Long
How Ghosts Inspired Kesha’s New Music
By Jake Viswanath
Get Even More From Bustle — Sign Up For The Newsletter