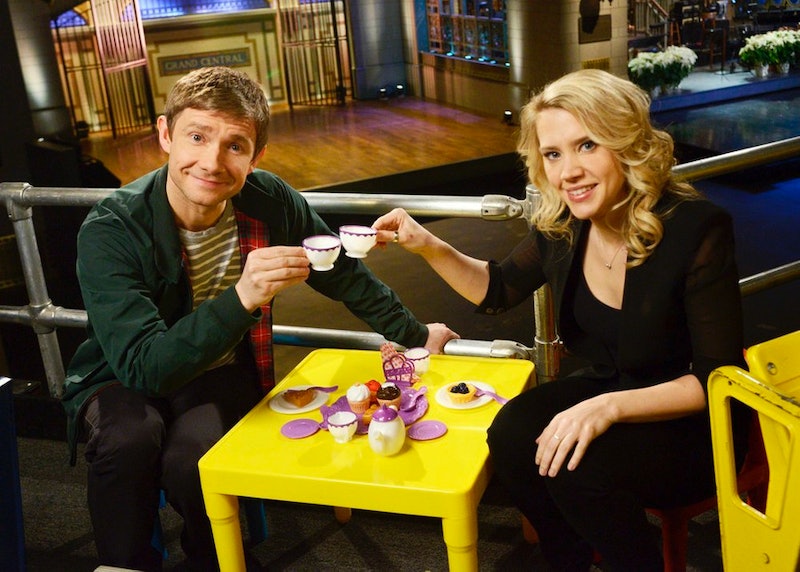 Oh, Saturday Night Live how you bring the merry to the holiday season. With Martin Freeman as host of SNL for the week, it felt mandatory that there were sketches that were inspired by Freeman's impressive resume. Good news for fans of The Office and The Hobbit, because Saturday Night Live combined the two of them for a "The Office: Middle Earth" sketch that was everything you could have ever asked from an Office meets Hobbit sketch.

It started out just like any episode of The Office (British or U.S. version), with a talking head. If you're not familiar with the term — meaning you haven't watched a million behind-the-scenes videos of The Office on YouTube — a talking head is when a character of the show is talking directly to the camera for a one-on-one moment. It is here we learn from Bilbo Baggins — Freeman's character in The Hobbit — that he has saved middle Earth, so he's moved on to working at a paper company and driving a Jetta. (Note: The BBC logo was changed to a JRR logo, in honor of The Hobbit's parent J. R. R. Tolkien.)

Freeman combined both of his characters — Bilbo and Tim (Jim for those that haven't seen the British version) — into a perfect hybrid character that still pranks the Gareth/ Dwight character by placing personal items in Jello forms. But of course, because this was The Hobbit inspired, the personal item was the ring, and the Gareth/Dwight character was Gollum. We also got to see Bilbo flirt with the receptionist, and team up with her to play pranks on Gollum.

We even got a little Gandalf, "Thou shall not pass," but this time, it ended with "... gas," in true Office form.