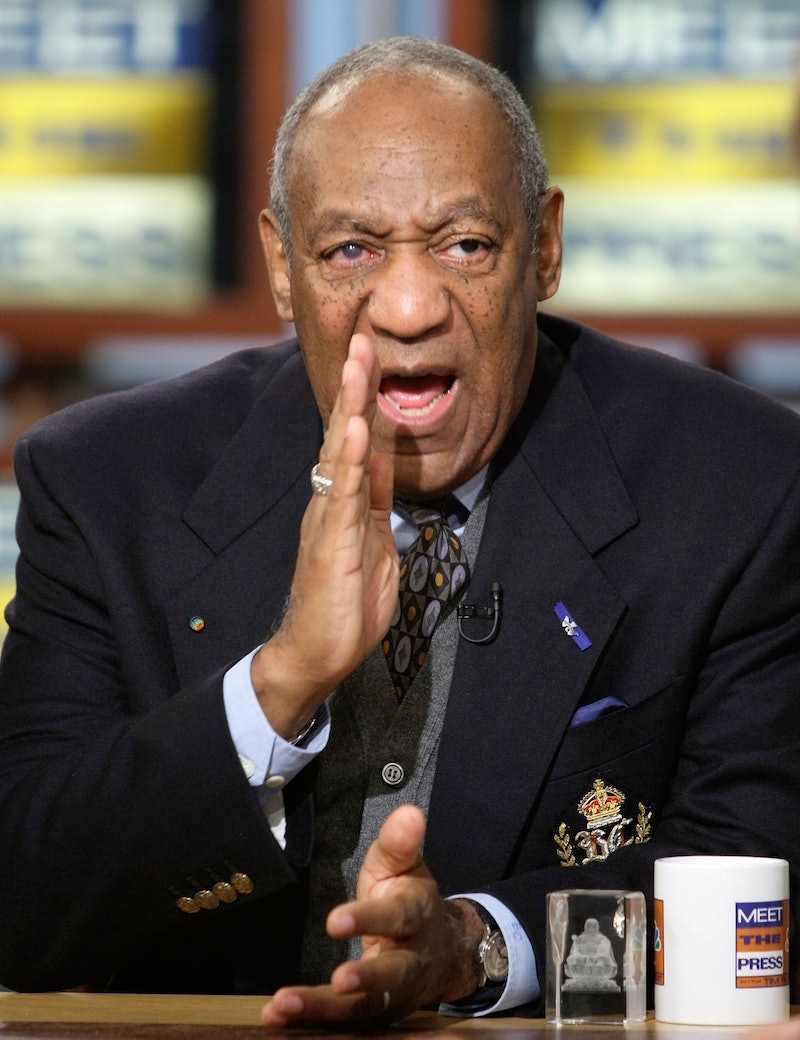 The famed actor is again breaking his silence, and this time Bill Cosby is asking the "black media" to be on his side. In the wake of yet another rape claim, this time from model Beverly Johnson, Cosby has spoken out but he's still not saying what anyone wants to hear. I have such a hard time believing that 20+ women are lying about being drugged and sexually assaulted, and yet Cosby is still acting like none of that deserves his attention.

At the start of all this, Cosby had only spoken through his lawyer Marty Singer who released a statement saying Cosby would not dignify claims with a response. "Over the last several weeks, decade-old, discredited allegations against Mr. Cosby have resurfaced. The fact that they are being repeated does not make them true," the statement read.

Now he's speaking up again, but he's still not addressing the actual claims. In an interview with the New York Post he spent a majority of the time thanking his wife for standing by his side. Then he essentially asked Post reporter Stacy Brown (who admitted he often writes for "the African-American media") to remain unbiased towards him. "Let me say this. I only expect the black media to uphold the standards of excellence in journalism and when you do that, you have to go in with a neutral mind," Cosby said to her.

But here's the thing that Cosby isn't understanding: rape is rape and race has nothing to do with it. Some things are about race, but this isn't one of them. The media, black or otherwise, isn't failing to "uphold the standards of excellence in journalism" by reporting that what these women have accused Cosby. He's not being targeted because of his skin color. People are upset with him because of his crimes, and would feel the same if he was white.

7th Heaven actor Stephen Collins underwent a similar media backlash after it was discovered that he allegedly molested several children decades ago. Their two stories are similar because both happened a long time ago and destroyed their "good father figure" images that their years of acting had crafted. But Collins is white and Cosby is black and the media rightfully feels the same way about both of them: disgusted.

Besides, one commenter on the Us Weekly report said it best:

The ENTIRE media gave this man a free pass for more than a decade even though these stories have been out there for years!! And btw, these crimes have zero to do with the fact that he is black. He used his power and money to commit these crimes and that has no skin color.

Exactly. Nice try Cosby, but I'm not buying it. Until he actually addresses these claims instead of blaming the media for not being neutral and not fact-checking, I'm on the side of the over 20 women he allegedly assaulted. They're being brave and speaking up while Cosby continues to pathetically hide behind race cards and lawyers and the futile hope that we'll all just forget about this. Well his alleged victims can't forget, and I refuse to, so it's time he speaks up and says something actually worth listening to.