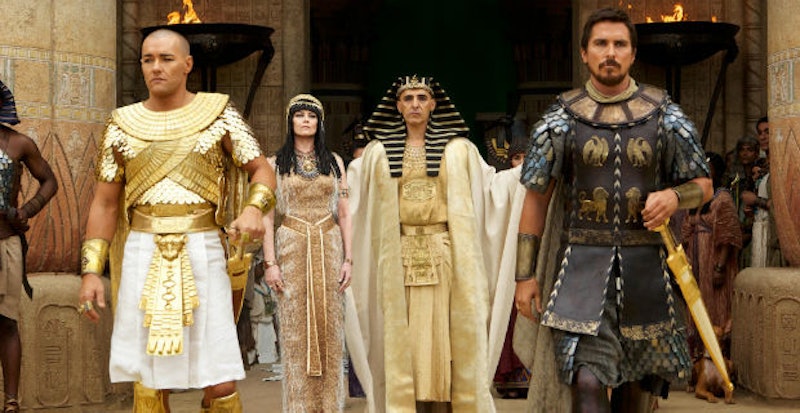 Mockingjay fans, you're going to have to work a little harder if you want to keep the third installment of The Hunger Games in the top slot at the box office. Although she's definitely become comfortable there since the movie's release in November, this week, Katniss has had to give up her home at number one. The new reigning box office champ is Exodus : Gods and Kings , starring Christian Bale. The movie, which hit theaters Friday, made $24.5 million in its opening weekend — and even though that sounds like a ton of money, it's less than the studio was hoping it'd bring in.

According to The Hollywood Reporter, Exodus had a budget of $140 million, so in order to break even, they have a lot of work to do. Internationally, though, the total was $43.3 million, which is a bit more promising. In other news related to incomprehensible amounts of money? Mockingjay, which fell to number two, now has a worldwide total of $611.4 million. Knowing this, would it be totally out of line if we all got together and circulated a petition asking Jennifer Lawrence to pay off our student loans?

And as for the rest of the box office? Penguins of Madagascar came in third — which isn't surprising at all, considering that a big amount of movie goers are parents who bring their kids. Chris Rock's movie, Top Five, took fourth place, and finally, Disney's Big Hero 6 took fifth.

Let me drop a quick tip to movie theaters (and studios) in America who are hoping to up their ticket sales in the coming year: Lower your prices. Just a little? It's so unfortunate that popcorn has to cost $8... and even more unfortunate that I always end up breaking down and paying it. And a $6 soda. And usually candy. And then I leave in debt.

Meanwhile, it's not as if anything at the movies matters until Christmas Day, when Into The Woods premieres. Anna Kendrick as a singing Cinderella? Sign me up.