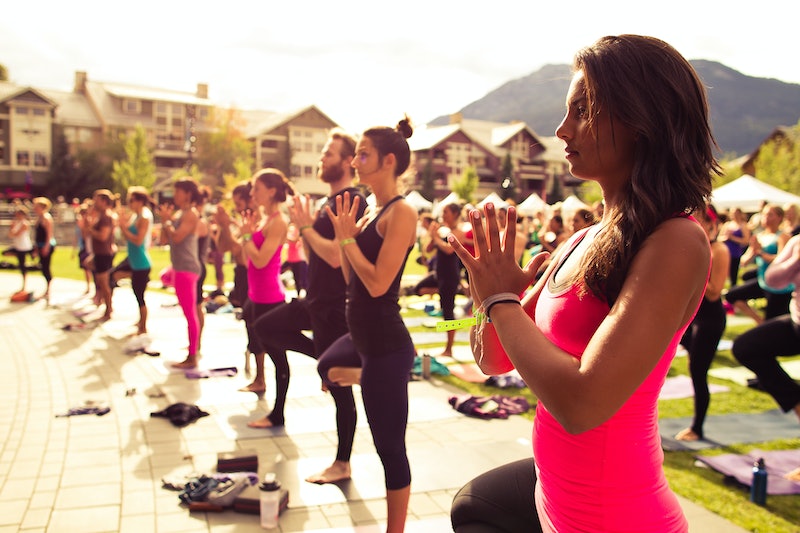 There is so much to like about a yoga-filled lifestyle: the release of the ego, mindfulness, stretching, sweating, strengthening, laying.

But when did yoga become so competitive? I'm not just talking about the smug man doing headstands while I hide in child's pose. (But honestly, guy, come on.) I'm talking about yoga as a trend, as an industry.

Going to regular yoga classes is a luxury — almost an indulgence. It can be an intense community of people, too; serious yogis can come off as intimidating. A lot of the yogis I have met have been extremely driven and extremely serious about the "rules" — no laughing, no cell phones, no baggy shorts. Some even opt for hot yoga, which I'm campaigning to rename "torture yoga."

It seems that inner peace comes with a high price tag. The Yoga Journal's Yoga in America study reported that in 2012, 20.4 million people called themselves practicers of yoga. Yoga practitioners spent approximately $10.3 billion on yoga classes, clothing, equipment, vacations (huh?), and media. That works out to about $500 a practitioner.

The original yogis would be confused. The practice of yoga dates back to ancient Hindusim. In Hindu scripture, disciplined yoga practice is a way to attain heightened consciousness and detachment from the material world. The emphasis is on learning to control the mind and the body. In the second chapter of Bhagavad Gita, a Hindu scripture, Krishna tells Arjuna, "Be steadfast in yoga, O Arjuna. Perform your duty and abandon all attachment to success or failure. Such evenness of mind is called yoga." For Hindus, yoga is a sacred discipline meant to bring practitioners enlightenment and closeness to the divine.

Hatha yoga came westward in the 1980s and is what we now refer to as plain yoga — a disciplined series of poses meant to strengthen the mind, body, and breath. But it's become more than just a fitness thing; it's a trendy lifestyle: The 20.4 million yoga practitioners (up from 15.8 million in 2008) are shelling out big bucks on spandex and mats (not to mention yoga hammocks). Pricey yoga equippers like Lululemon, Lucy, and Athleta are enjoying the trend. Despite that nasty recall last year over see-through pants, Lululemon is making a profit and growing in sales.

How do we rectify yoga's boom as an industry –– as a community of candy-colored spandex-wearing, $500-a-year-spending stretchers and breathers — with yoga as a discipline that encourages freedom from attachment to the material world? I confess to falling prey to the Lulu lure; their products are fantastic and last for years. But in every yoga class, there seems to be an unspoken element of hierarchy, of luxury and competition. If you're paying at least $12 to drop in and $100 to wear those pants, you live comfortably.

The studio I visit, Yoga to the People, seeks to eliminate the impacts of the material world from the practice of yoga. With studios in New York, Seattle, San Francisco, and, surprisingly, Arizona State University, YTTP does exactly what the name promises: They strip the discipline of yoga of its flash and stigma and deliver the practice of yoga, the core (ha) benefits and magic of yoga, to everyone. Their mantra erases the stigma of a yoga class as a luxury or industry or competition:

There will be no right clothes

There will be no proper payment

There will be no right answers

No ego no script no pedestal...

Donation-based yoga without the idea of "rules" or material glory — that's a pretty excellent interpretation of Krishna's advice.

More like this
The Best Exercise Equipment For Low-Impact Workouts
By Carolyn Steber
The Secret To Breathing Properly During Your Workouts
By Carolyn Steber
Wimbledon Alters All-White Kit Rule Amid Candid Period Discussions
By Catharina Cheung and Rachel Mantock
Daily Horoscope For December 1, 2022
By Mecca Woods
Get Even More From Bustle — Sign Up For The Newsletter