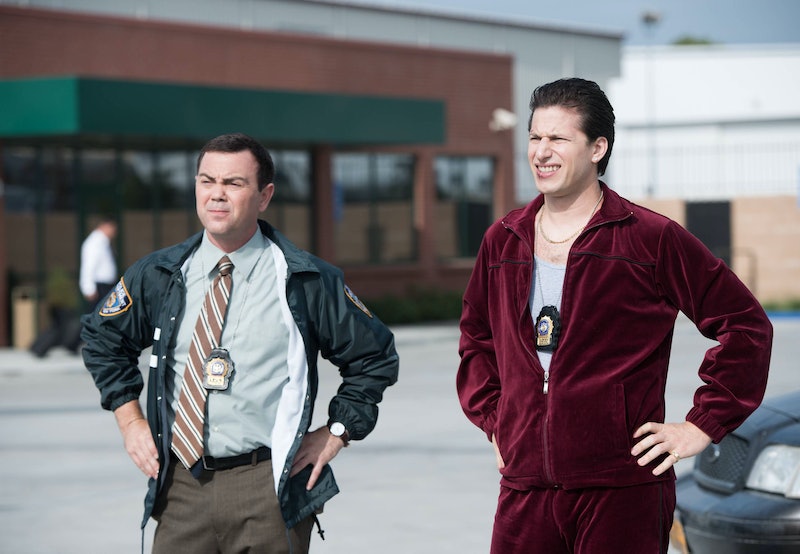 We all have our own favorite TV couples whose break-up would just tear us a part. Jake and Boyle from Brooklyn Nine-Nine are that couple for me. Sure, they're obviously not a romantic couple but just best friends, but even so, if these two ever called it quits, I would be devastated.

We came close to that reality during the Dec. 14 episode of Brooklyn Nine-Nine, and even thinking about a world where Jake and Boyle aren't in a bromance sends shivers down my spine. In the episode, Jake and Boyle are assigned to a stakeout of a member of the Ukranian mafia doing your usual illegal activities. Captain Holt originally suggested two teams for the eight-day stakeout, with each keeping watch for four days each.

But Jake and Boyle are besties, and what could be better than hanging out with your homie for eight days straight? So they volunteer to do the full eight days by themselves, a "Hanukkah miracle" as Jake says, even though everyone warns them that even the best of friends will get on each other's nerves after a while.

Still, Jake and Boyle enter the stakeout as enthusiastic as ever. They've got a nice supply of gourmet food, a mini basketball and hoop, and even a theme song which goes, "Stake me out tonight. I don't want to let you go 'til we catch this guy" to the tune of "Take Me Home Tonight" by Eddie Money.

But as you can probably gather, things go horribly, horribly wrong. And it doesn't take that long for it to happen either. Jake doesn't like the way Boyle chews his food with his mouth open. Boyle doesn't like the fact that Jake ignores his pancakes, opting for the butter and syrup combo instead.

Pointing out these little pet peeves turns into airing all of the grievances, with each literally writing out what he can't stand about his partner on the wall. Might I just say I'm a big fan of Boyle's sassy "Nuh uh uhs." How could anyone not like that?

Being cooped up together for that long of a period of time eventually takes its toll on this partnership, and Jake says those fateful words to Boyle, "We're not friends." I don't know about you, but when I heard those words, a montage of Jake and Boyle' best buddy moments from the two seasons of Brooklyn Nine-Nine flashed before my eyes. What would I do without Jake accompanying Boyle as he critiques pizza? Or without Boyle helping Jake tap into his real emotions, such as helping him realize he had feelings for Amy? And what would Boyle do without Jake to keep him from going "Full Boyle"? It is a sad world indeed.

Luckily, they stayed enemies for as long as a commercial break. After causing the stakeout to fail, Jake and Boyle had to go out and nab this perp, even though they hated each other's guts. Of course, they couldn't do it without the other partner, and their friendship was as good as new.

In any sort of piece of entertainment, you can't just have characters be friendly toward one another all the time, no matter how close they are. A full episode dedicated to slowly pitting Jake and Boyle against one another was inevitable. As much as I'd never want this friendship to be broken up for good, focusing on two of the best and most lovable characters of the show by adding this bit of tension was very successful and made this episode one of my favorites of this season.

And the timing couldn't have been any better. Brooklyn Nine-Nine will be off for a few weeks for its holiday hiatus, and this episode was a solid note to end the year on.