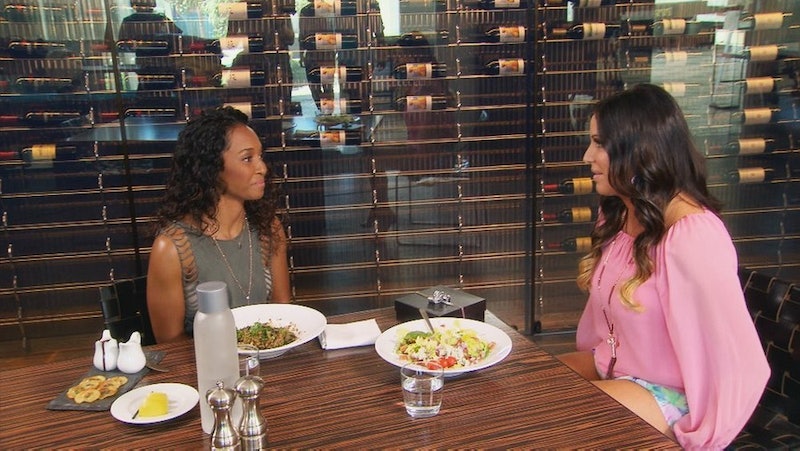 Bravo isn't run by fools — they know that there's plenty of money to be made off of 90s nostalgia, so they've pushed Patti Stanger to take on more celebrity clients this season. Rozonda "Chilli" Thomas is known for dating successful hip hop and R&B stars, but she wasn't looking to repeat her relationship with Usher when Chilli appeared on The Millionaire Matchmaker . While she balked at discussing her failed relationship in detail, she certainly seemed very guarded about opening herself up again. While she was insistent that she really wanted to find another relationship, it was almost like she was forced to come on this show against her will.

Again, Patti's track record with… engaging diversity of any kind (be it ethnic, sexuality, or even weight) hasn't been the best. But having a strong personality like Chilli on deck was good for the episode. Chilli is not about to show up with stick straight, waist length weave. And while she admitted she wanted a super-hot guy, you could see Patti's head spinning when she admitted one of her celebrity crushes was Asian. And while she ended up matching Chilli with a few white guys, I was happy to see that the mixer/casting session (I'm still digging the new version of the casting call!) was pretty diverse.

The other date of the evening was Jeff Ogden, a repeat client and former NFL player who meets this season's requirement for minor celebrity, but, like Larry Birkhead in last week's premiere, he was a pretty boring presence. And damn, Chilli looks amazing.

Seriously, when she said she's been in TLC for 20 years, I knew intellectually that it was true, but she barely looks older than me, and I was two years old 20 years ago. Unfortunately, her first date was a huge bust, and the guy she picked, Brian, was so boring, Bravo had to bring Patti and her peanut gallery along to narrate MST3K style, and break it up. Poor Jeff barely got any screen time between all of Chilli's much more watchable drama and the unseemly amount of commercials Bravo can pack into a single hour (a TV network's gotta eat, after all).

The second half of the show managed to pass without anything hilarious or embarrassing, with two good dates that resulted in no relationships, so there's not much to report on… but I'm happy for Chilli, whose highly publicized relationships have never worked out. Even though she didn't have fireworks with Polish lawyer Felix, that's just because she's not the type to fall in love on TV.

She's too much of a boss for that — and she posts plenty of flirty Instagram photos that suggest that she's more than comfortable getting back out on the dating scene.

More like this
'The Bachelor's Peter Weber & Kelley Flanagan Are Reportedly Back Together
By Grace Wehniainen
Filming For 'Bling Empire' Season 3 Picked Up Right After Season 2’s Drama
By Gretchen Smail
Andrew Gray Returned To 'Bling Empire' In Season 3 To Make Amends
By Brad Witter
The 'Love Is Blind' Season 3 Teaser & Release Date Are Here & The Cast Is "All In"
By Kadin Burnett, Grace Wehniainen and Gabrielle Bondi
Get Even More From Bustle — Sign Up For The Newsletter