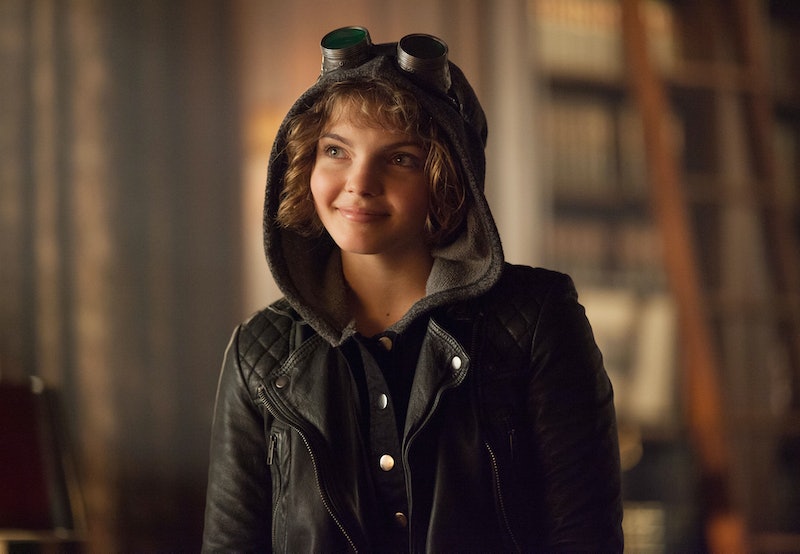 The sweet dynamic between the teenaged Bruce Wayne and Selina Kyle has become my favorite aspect of Gotham. Comic fans obviously know Bruce's backstory well enough to recite it in our sleep, since we've seen Batman's parents die again and again. But teenaged Selina Kyle, who has yet to take on the name Catwoman, remains a cipher. Who exactly is this parent-less, goggles-wearing, cat-loving thief? When Gotham returns from hiatus on Jan. 5, will the show create its own backstory for her or draw on established origins from the comics? Selina has been a character since the 1940s, so her rich history gives the writers a lot of different options to draw from. After Selina gives odd, contradictory hints about her parents to the adorably smitten Bruce, a question dawned on me about where Gotham could be going with her character. Could Selina be Carmine Falcone's illegitimate daughter?

The comic book miniseries Catwoman: When in Rome centers upon our beloved villainess, Selina Kyle, taking a trip to Rome in hopes of finding out the truth behind her parentage, believing her father may in fact be mob boss extraordinaire, Carmine Falcone. On Gotham, as we saw Bruce and Selina become closer as friends she revealed a bit more about herself. But her explanations about her family come across as a scared kid spouting the fantastical because she doesn't know the truth.

We didn't get much information about Selina until she started getting buddy-buddy with Bruce. Up until that point, Gotham was content with her being snarky and prancing around the shadows of major events. We also haven't seen enough of Falcone's familial life to get a hint one way or another. But the show has proven to be content exploring the criminal rather than fantastical aspects of Batman's world. So it would make sense to explore this angle.

In an interview with the Village Voice, Gotham showrunner Bruno Heller said, "The origin stories of all these characters have always seemed to me to be the meat of the genre; that's where the real fun is." And if what we've seen thus far from the first season is any indication, prepare for a lot of backstory on the main set of characters that have been introduced, including Selina. Gotham has also been keen to parallel Bruce and Selina in regards to their loneliness over their family dynamics, which Camren Bicondova, who plays Selina, discussed in an interview with Collider.

Catwoman tends to be oversexualized, even in her backstory, which Gotham showrunners told The Mary Sue they want to avoid. So the most viable option is to further link Selina to the strongest part of the show, the exploration of the criminal underworld. Teasing out that Selina Kyle may be Carmine's daughter would have reverberations through the underworld and would nicely echo what's going on with the dynamic character found in the comics.

While all of this may add up to the writers alluding to comic book history for the sake of the die hard fans in the audience, I would like to believe that Gotham will build on the other characters besides the Penguin. It may be tough to fit in further exploration of Selina's backstory this season, especially since it has been revealed that a younger version of Scarecrow is coming to Gotham .

But the show proved in the episodes leading up to the midseason finale that the teenaged Catwoman is one of their best (and most popular) characters, especially when she is playing off of Bruce Wayne. Gotham would be smart to capitalize on that dynamic by adding the storyline of Selina potentially being Falcone's daughter, and if they, I can't wait to see what will happen next.