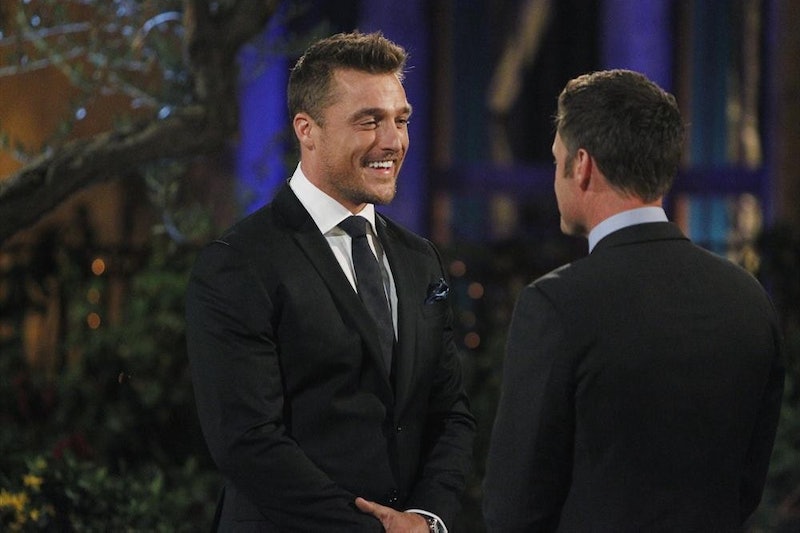 If your fantasy football team is doing as poorly as mine is, then you know that it's finally time to ditch the filler and get around to the real winter sport: The Bachelor. Just as with the NFL season, in the land of Bachelor fandom, there's theorizing, there's planning, there are stats; and most of the pre-season player info comes from the Bachelor Czar, himself Reality Steve. A few weeks ago, Wetpaint reported that Reality Steve had gotten ahold of some spoilers about Chris' final rose ceremony that predicted a twist, "so ugly, so unexpected, we feel like we've been Juan Pablo'd all over again."

Say it ain't so! I simply don't think it's possible for me to despise Chris as much as I despised Juan Pablo. Unlike JP, who never even got a one-on-one with Des before he went on to the Bachelor throne that Chris Harrison built, we saw a lot of Chris in Andi's season and he seems like a good guy. He'll stick up for himself when he needs to, come out of his shell when he's ready, and never once did he take a girl on a helicopter to tell her he enjoyed having sex with her more than he actually enjoyed her as a person.

But still, if Reality Steve says there's an mystery JP-like twist, then there must be. We know there's the foreboding pregnancy test in the in the promo, but as the turnaround between "Fantasy Suites" and "Final Rose" is, like, two hours, I think it's safe to say Chris wasn't too involved in the making of that drama. So as any good sports fan would, let's do some theorizing on what big "Final Rose" twist this season might hold. Potential spoilers (if I happen to be psychic) ahead...

Chris is a Little Too Close With His Super Cool Family

Reality Steve also revealed that Chris and his 30 potential wives would only be leaving the country once this season, for "Fantasy Suites." The rest of the dating will take place in the United States, and Chris will take his final two back to Iowa after he (probably) beds them in Bali. There, the two women will find Chris' super fun family, who you may remember were almost enough to make Andi forget that she loved two other bros more than she loved Chris. Because, seriously, after-dinner-hide-and-seek? Sign me up for those in-laws.

But maybe if the women stick around a little longer, they'll start to realize that something is a little weird here. Like, Chris' mom chews all his food up for him, and hide and seek turns into the plot from The Most Dangerous Game on the weekends.

Chris is Actually a Marijuana Farmer

Plain and simple: Chris could be growing a lot of weed out there in Iowa. While that could wow some women, it could also send some folks running for the hills.

Chris Gets in a Fight with Neil Lane

Things come to fisticuffs when Chris tries to tell the ring designer to the stars that he wants a cushion cut instead of a princess cut, and shows up to the Final Rose altar with a black eye and a cubic zirconia.

Chris' Giant House is Full of...

Cats: Why else would a 33-year-old man have that many bedrooms?

His Family: "Welcome to your home, new fiance. My whole family lives here, and you and my mom are sharing bunk beds!"

Coupons: We know him as Chris the Farmer, but Iowa knows him as the Coupon King.

Hey, this is The Bachelor... anything could happen.

More like this
Everything To Remember About Lace Morris Before 'Bachelor In Paradise' Season 8
By Grace Wehniainen
Where Is Former Bachelor Host Chris Harrison Now & What Is His Net Worth?
By Hugh McIntyre
Here's The Full List Of Zach's Confirmed & Potential 'Bachelor' Contestants
By Kadin Burnett and Grace Wehniainen
Here's Exactly When Rachel & Tino's Fight Happened After 'The Bachelorette'
By Grace Wehniainen
Get Even More From Bustle — Sign Up For The Newsletter