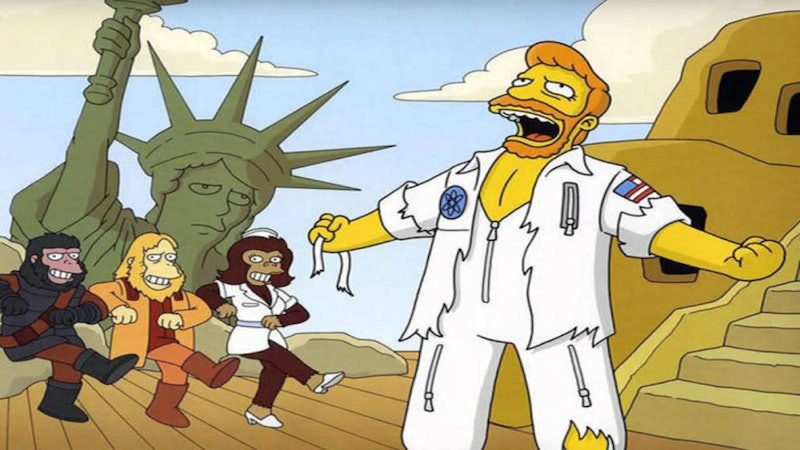 Choosing your favorite Simpsons song is a little like giving a mule a spinning wheel… or something to that effect. It’s a tall order, since you’re bound to have entertained every one of the show’s golden era ditties as suitable for housework humming, road trip sing-alongs, or even the more ambitious karaoke outings. In its prime, The Simpsons managed some original tunes that’d rival the sophistication of Johann Sebastian Bach, the wit of Cole Porter, and the brazen catchiness of the Spice Girls’ “Wannabe.” With such a vast trove of genius to consider, it’d be quite the Sisyphean effort to name the best of the lot. But hey, what else am I gonna do today?

In honor of The Simpsons’ 25th anniversary, I’m celebrating the wealth of musical whimsy that has sprouted from the impressively acoustic alleyways of Springfield. From the show’s many clever parodies of pop culture hits to its entirely original bouts of harmonic mastery,

Singer(s): The unnamed stars of the Broadway musical Kickin' It: A Musical Journey through the Betty Ford Center.

Gambit: A parody of the cheesy, lavish showbiz-themed musicals that stake perpetual occupancy of Broadway theater, but with the modern spin of tackling the endemic of drug addiction amongst Hollywood celebrities.

Gambit: A vicious jab at the outlandish, machismo-obsessed jingles of the American auto industry.

Singer(s): The members of the Stonecutters secret society (soloists include Homer, Lenny, Carl, and a Martian).

Gambit: General ridicule of the notion of "secret societies" and lodge groups.

Gambit: A jarringly prescient take on the sad songs of the country music genre.

Gambit: A pretty shameless (in keeping with the episode it closes out) knockoff of "We Didn't Start the Fire" by Billy Joel, commemorating the various antics of the Simpsons family.

Gambit: A mostly sincere, albeit wordplay-laden, protest song in the style of Phil Ochs and the like.

Gambit: A gentle spoof of the Cheers theme, but applied far less whimsically to Moe’s rundown and depressing tavern.

Gambit: A direct parody of the song “Kids” from Bye, Bye, Birdie! (unique among Simpsons songs in that it repurposes the original number’s melody exactly).

Singer(s): Apu and the Simpsons.

Gambit: Not much of a "shtick" here; just an upbeat family sing-along.

Gambit: A pretty clear parody of the Goldfinger theme, both in composition and content. Granted, the maniacal villain sung about here is far more amicable than that dastardly Auric G.

Singer(s): Shary Bobbins and the Simpson family, with brief appearances by Chief Wiggum and Apu.

Gambit: A direct parody, both in composition and theme, of the Mary Poppins song “A Spoonful of Sugar.”

Gambit: I have no idea what this is supposed to be. It's barely even a song, in fact. But it is one of my favorite sequences in Simpsons history, so here it is.

Gambit: A take on the general musical stylings of Michael Jackson.

An attempt to explain its glory: Arguably the most memorable song to spring from The Simpsons' 25-year-and-counting run, what separates this entry from the rest of the pack is that it is not, in any capacity, meant to play as a joke. The number, co-written by Bart and a Michael Jackson wannabe, is meant instead to exemplify the special relationship shared by the always different, often contentious, but consistently loving brother and sister. It's one of the series' most touching moments, and a catchy tune to boot.

Singer(s): Troy McClure and several unnamed (and heavily costumed) actors in the stage musical Stop the Planet of the Apes, I Want to Get Off!

Gambit: A send-up of the half-cocked and cheesy “musicalification” of classic Hollywood films. Additionally, the “Dr. Zaius” segment is a parody of the song “Rock Me, Amadeus” by the band Falco.

An attempt to explain its glory: If The Simpsons' principal mission is to lampoon all corners of pop culture, then this is very close to its greatest effort to date. The silly number sends up three or four constructs in modern entertainment all at once, committing to a silliness that rings horrifically true. And, quite simply, the line "I hate every ape I see/From chimpan-A to chimpan-Z" is just shy of Shakespeare.

4. “We Put the Spring in Springfield”

An attempt to explain its glory: Eh, maybe I'm ranking this one too high. It's generally neglected among the upper echelon of this list, but serves as a terrifically catchy "rallying the town" show tune that mines the varied caricatures of Springfield for a warm, fan-rewarding humor.

Gambit: A direct parody of Cashman's own "Talkin' Baseball," chronicling the sour tragedies to befall the episode's varied baseball greats.

An attempt to explain its glory: The rallying of Cashman to sing the parody is what makes it work: it doesn't "feel" like a parody, rather like an earnest celebration of the wily high jinks of Homer and his Major League Baseball teammates (many of whom suffered the most dastardly of fates, which are all narrated merrily in this closing number). The combination of sweet, wide-eyed naïveté and abject disaster represented by this song is a pretty good summation of what makes The Simpsons so special on the whole.

Gambit: A play on The Music Man, particularly its most famous number “Ya Got Trouble.”

An attempt to explain its glory: Ah, the venerable kingpin. (It was really tough not to make this my No. 1.) An even better example of the character of Springfield itself than "We Put the Spring...", utilizing the Music Man model to highlight the wonderful recipe of old fashioned small-town whimsy and modern cynicism and aggressive ignorance that makes up the show's unique setting. The final back-and-forth between a harried Marge and a merry, swept-up Bart (speaking on behalf of the "mob") is practically the first 10 seasons of the show summed up in one glorious soundbite.

Singer(s): An uncharacteristically elated Monty Burns (with a quick cameo by a Mrs. Potts-ian housekeeper).

Gambit: A direct parody of Beauty and the Beast’s “Be Our Guest,” but with far more sinister implications.

An attempt to explain its glory: Plain and simple: it's so damn funny.