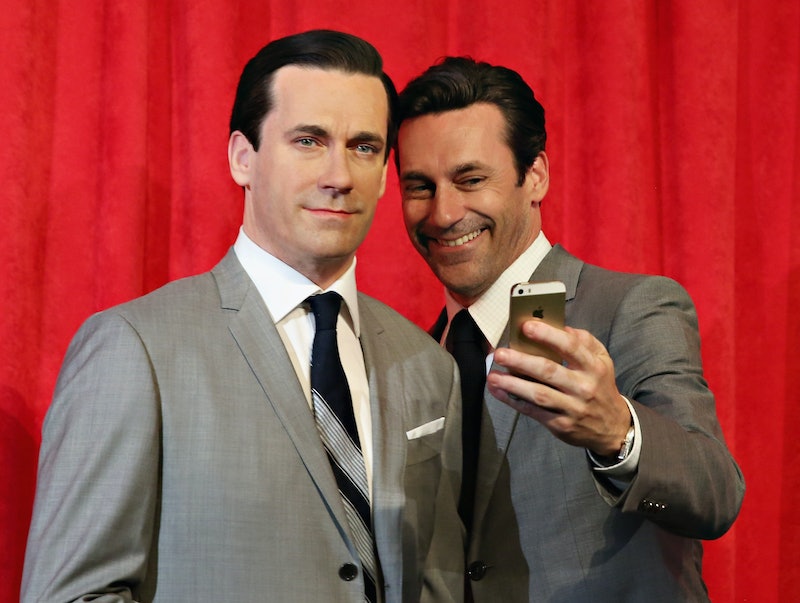 With Mad Men coming to a close, we're all wondering what the cast will do next. Although futures are still up in the air, one thing is for sure: Jon Hamm won't play a superhero. During an interview with Radio Times, he went on a rant about the genre and randomly, One Direction. "If your last name’s not Hemsworth or you are not in One Direction or you don’t wear a cape and tights for a living, you literally have a hard time making an impression," he pointed out. And though he's been up for "quite a few" superhero movies, he's glad he made the "right decision" to say no — mostly because it leads to many sequels and crossovers, like The Avengers.

"For me to sign on now to do a superhero movie would mean I would be working until I am 50 as that particular superhero," Hamm said (and for the record, he's 43 now). "It’s a lot of work at one thing which is not necessarily the reason I got into the business which is to do many things." Even though we won't see him in the Batmobile, he's still a superhero in my heart. Not for being heroic, necessarily, but for doing amazing and hilarious things like taking selfies with his wax figure (pictured above) and making an '80s show with Jimmy Fallon. Let's relive all of these glorious moments, shall we?

The one with the sub is just ridiculously amazing.

The Greatest Event in Television History With Adam Scott

Their shot-for-shot remake of the Simon & Simon intro is amazing, but the behind-the-scenes footage of Hamm and Scott in green onesies is even better.

This fake '80s TV show is the best. Hamm and Fallon together is always awesome.

25-Year-Old Hamm on a Dating Show

In 1996, this happened, and his hair on The Big Date isn't even the best part.

7 Minutes in Heaven With Mike O'Brien

Being Adorable With Girlfriend Jennifer Westfeldt

They've been together for for 17 years (and no, they aren't married), and they are so cute. Here's a photo of them eating pizza together, because if that's not true love, what is?

Have you ever seen anything more precious than Hamm with Elmo? Nope, you haven't.

Dancing With Betty White at the Primetime Emmys

Playing the Sax as Sergio on SNL

Beware of the curse of Sergio and his saxophone skills in this amazing digital short.