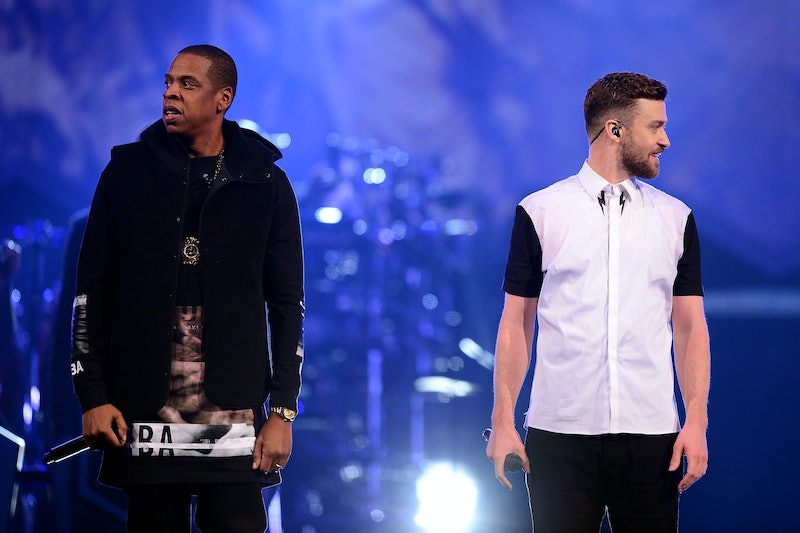 Is this just a continuation of Taylor Swift's epic birthday weekend, or purely a coincidence (I'd say the former, since I think Taylor Swift is the sun that we all revolve)? We all know that Swift had one of the most envious birthday bashes this past weekend where huge stars like Sam Smith, Beyonce, Jay Z and Justin Timberlake aligned and celebrated her 25th year, but it was really all of our birthdays this weekend when Timberlake shocked 20/20 Experience concert goers with Jay Z and performed "Holy Grail" on Sunday night at the Barclays Center in Brooklyn. And while we don't know if this performance was part of Swift's birthday spectacular — Beyonce and Swift were in the crowd jamming out (this is Taylor Swift, after all) — the performance did solidify one thing: Justin Timberlake is the best at surprises.

Timberlake, master surprise giver, is really proving he is the guy you want to throw your birthday parties (an easy snag, I'm sure). In the past, JT has surprised audiences, fans, and celebrities (yes, even Swift back when she was all curls and crying onto her guitar). Here's a look back at some of JT's best surprises through the years, from truly hilarious to incredibly heartfelt.

Personally, I would have been passed out on the Barclay's floor if this happened while I was at the concert (if I wasn't already passed out that Beyonce and I were sharing the same air). If you liked this song before, you're going to love it even more now, because these two live is like a sensory explosion.

JT Surprises Taylor Swift with Himself on Ellen

Even Swift acts a little silly around JT when she first met him on Ellen in Nov. 2008. She had no clue that he was at Ellen that day — he's just sneaky like that — and as you can see in the video, totally shocked Swift when Ellen brought him out. And here we are, six years later, JT is going to Swift's birthday party wearing a poop head, and I'm still not friends with either of them.

JT Surprises Fans with Himself on Set

Timberlake's biggest fans got the surprise of a lifetime when they were invited to introduce his new album for a promotion. Little did they know that JT himself would be crashing the video shoot. I think we can all say we are the guy at 1:29.

JT surprised audiences back in 2013 with surprise guest Timbaland for "Sexy Back," because the Timbs are bringing it back, people!

JT Surprises 8-year-old with a Birthday to Remember

Julian Delan, an 8-year-old boy with Autism, got the attention of JT during a concert this year and told him it was his 8th birthday. Because JT makes dreams come true, Timberlake and the entire stadium full of people sang the young boy "Happy Birthday."

JT Surprises Fans with a Mini-Concert at Target

Not all of JT's surprises happen in front of thousands of people. In Aug. 2013, JT held a mini-concert at a Target in New Jersey for only the first 150 people. Proving he is the master of surprise.

Now you can go back to listening to "Holy Grail" live on repeat.