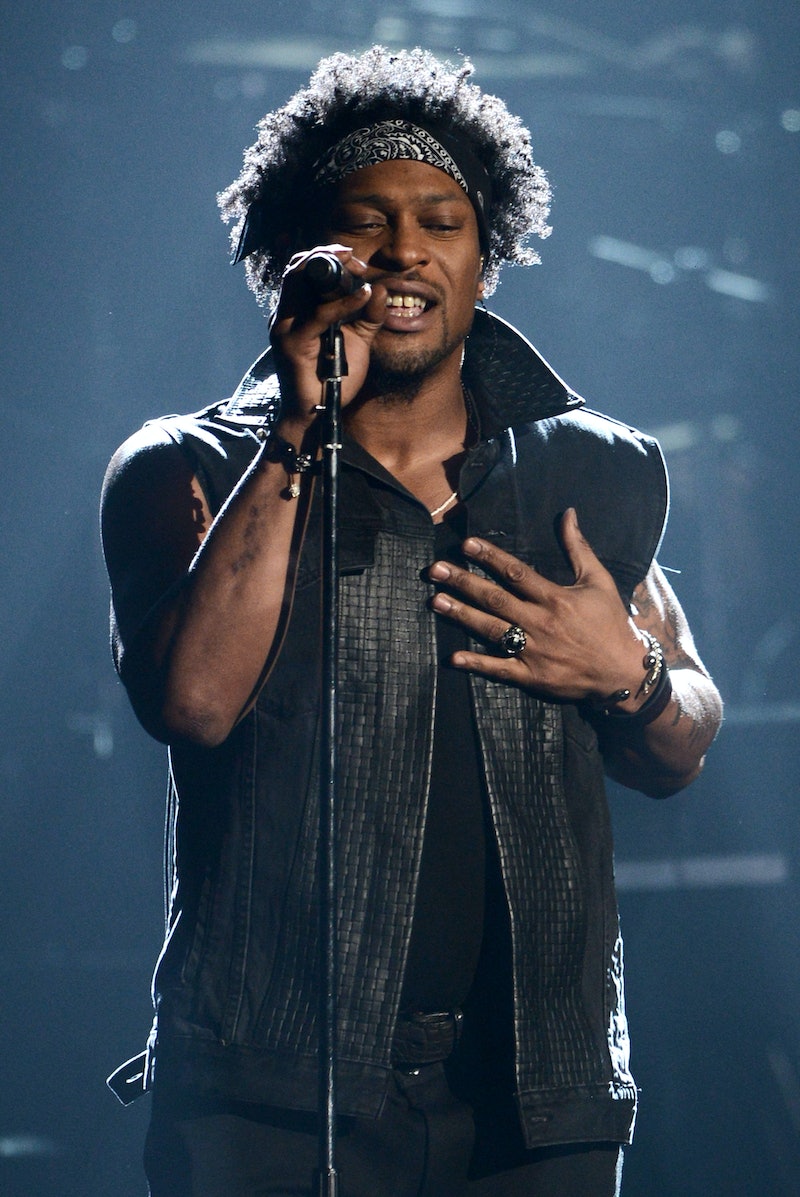 D'Angelo is back, people. This is not a drill. You did not fall asleep for 15 years and miss a chunk of his career. You (hopefully) did not forget about him. On Monday, the world woke up as Christmas came early to find that D'Angelo had released a new album — Black Messiah — to the world. Rejoice, everyone! Because there is some good music making its way to your ears via Spotify or iTunes.

D'Angelo has a very unique career. There was the time in the mid-to-late '90s that was all about the R&B star. He won the hearts of many, along with the recognition as one of the better R&B artists to ever exist. But then, he took a break. A breather. He took five years off and came back with a new album. Then, as he does, he didn't release another album until 2014. That's almost 15 years without new D'Angelo music, how did we survive?

Black Messiah is being met with incredible reactions by the public, many have been waiting for this day for 15 years. To celebrate D'Angelo's newest creation, let's take a look back at a timeline of his career.

The year was 1994. The Lion King had just been released, Friends was just beginning, and the world was about to learn about D'Angelo. D'Angelo had his first successful single, but it wasn't a song he sang, instead co-produced and co-wrote. "U Will Know" was written for Black Men United, an all-male R&B group that consisted of Brian McKnight, Usher, R. Kelly, Boyz II Men, and more.

The debut album of D'Angelo, Brown Sugar, was released. The album went on to spend many weeks on the Billboard charts, just a foreshadowing of what was to come with his next album.

Now comes D'Angelo's first of two large sabbaticals. This time around, he was pretty quiet in the music world, without any music released as a solo artist. But that doesn't mean we can't guess as to what he could have been up to.

He's baaaack. He might have been off the scene for a few years, but that's just so everyone could prepare themselves for Voodoo, his next album. This album was considered a "masterpiece" by fans and critics. It won a Grammy for Best R&B Album. It also featured "Untitled (How Does It Feel)," which might be the most sexually charged music video to ever exist.

Another sabbatical with no word from D'Angelo. My guess as to what he was up to? He, like the rest of the country, got really into Scrubs, which premiered in 2001. The next nine years were a total blur of counting the hours until the next new episode.

Rumors started to spread that D'Angelo was coming out with an album for 2009, but there was just radio silence. Here's this GIF, in case you are still bummed about the year of no D'Angelo album.

D'Angelo set off on a tour in Europe, where sold-out was just a common phrase. People couldn't get enough of D'Angelo (see above). He didn't make an appearance stateside until he surprisingly showed up at Bonnaroo in 2012, performing with Questlove and members of The Roots (and more).

It's been a long time coming, but we made it. Fifteen years since his last (highly successful) album, D'Angelo shocks everyone with the release of Black Messiah. Good to have you back, D'Angelo.

More like this
The Spice Girls Just Dropped A Brand New Music Video
By Sam Ramsden
Kate Bush Revealed The Real Meaning Behind 'Running Up That Hill' Lyrics
By Darshita Goyal
What Does Nancy Jo Sales Think Of 'The Real Bling Ring'?
By Arya Roshanian
12 ’90s Movie References You Missed In 'Do Revenge'
By Radhika Menon
Get Even More From Bustle — Sign Up For The Newsletter