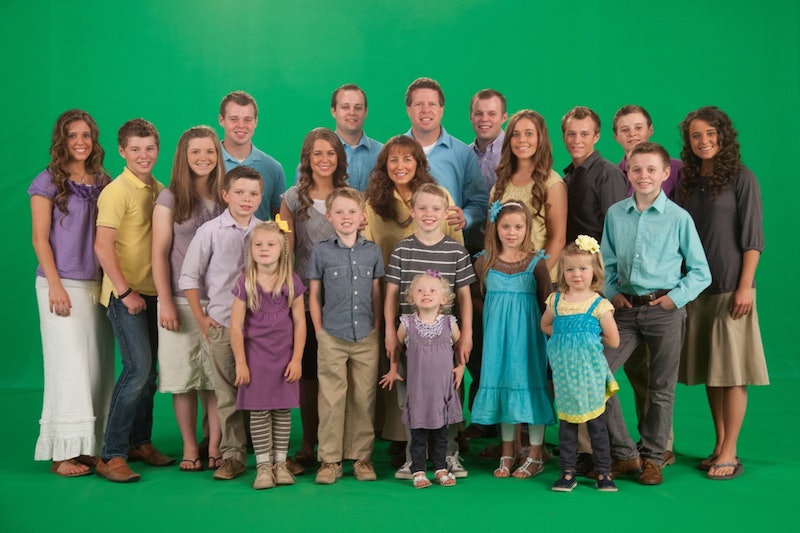 There are three facts that are always constant in our world: the sky is blue, the grass is green, and at least someone, somewhere in the Duggar family lineage is pregnant. It's just the way it works. Since 19 Kids & Counting has become a staple on TLC, viewers have seen the Duggar family expand tenfold. Not only are Michelle and Jim Bob's children getting married, but they're also having children of their own. Right now, two Duggars are pregnant at the same time: Jill, who's expecting her first baby, and Anna, Josh's wife, who's expecting their fourth. I can't help but wonder what the world is going to look like in the future as the Duggars keep reproducing. Eventually, will more people on earth have Duggar blood in their veins than not?

It's a total possibility — and I can say so with the math to prove it. I calculated how many Duggars there would be 25 years from now, in the year 2039... and the number is pretty surprising. Before I reveal what that huge, triple-digit figure is, I need to explain how I got there — and for those afraid of math, you're probably about to get the heebie jeebies.

First, I started with averages, and on average, each Duggar gets married at 21 (technically, 21.6, but I rounded down), since Josh married at 20, Jill married at 23, and Jessa married at 22. And since Josh and Anna have had four children in six years of marriage, including one in their first year of marriage, and Jill got pregnant almost immediately following her summer wedding to Derick, so I'm assuming Jill's going to follow their pattern. And, of course, we have to keep nature in mind. Michelle had her last baby at 43, so let's assume the rest of the Duggars follow suit.

Are you with me so far? Good, because this is where it starts to get a little crazy.

Assuming all the Duggars get married at 21 and have four children every six years, I started adding up their numbers. The base amount of Duggars for my calculations is 19 since Jim Bob and Michelle are unlikely to have any more children. From there, I figured that Josh and Anna will have 15 kids of their own by 2039 if they keep reproducing at the same rate until Anna hits 43, while their daughter Mackynzie will have had six, Michael will have had four, and Marcus will have had three, the baby Anna is currently pregnant with will have had two (insane to even comprehend, I know), and another baby they will have after that one will have had one. So far, we are at a total of 50 Duggars. Unbelievable.

Then I calculated Jana and John David, and since they're both older than 21 and unmarried, I calculated the children they'd have if they got married and pregnant in the next year — and the children their children would have, if they were old enough to turn 21 and start reproducing themselves. This brought the total to 80.

Next up? Newlyweds Jill and Derick and Jessa and Ben, who would be responsible for 14 children and three more grandchildren each. 114. Jinger and Joseph are also old enough to have children who will have children by 2039, making our grand total 146.

And now, we add in the rest of the kids. Together, Josiah, Joy-Anna, Jedidiah, Jeremiah, Jason, James, Justin, Jackson, Johanna, Jennifer, Jordyn, and Josie will all bring 123 children into the world.

Are you ready? Drumroll, please.

In 25 years, when we're wrapping up 2039 and getting ready to welcome in 2040, there will be 269 Duggars in the world. And if they all decide to put down roots in their childhood home of Tontitown, Arkansas? Being that the total population of the place was 2,625 in 2013, Duggars could make up appropriately 10 percent of the population if that number stays about the same, if births and deaths in the town happen about the same rate.

The moral of the story? If you're hoping 19 Kids & Counting will stick around, there's definitely enough family members to keep the series alive well into the next century. TLC, I hope you're prepared.

More like this
Molly-Mae Hague & Tommy Fury Celebrate Pregnancy Reveal In The Sweetest Way
By Sophie McEvoy and Sam Ramsden
Kendall Jenner Thinks Tristan Thompson "Wanted To Trap" Khloé With Another Baby
By Jake Viswanath
18 Years After 'American' Idol, Jennifer Hudson & Simon Cowell Reunited On Her Talk Show
By Radhika Menon
Clayton & Susie Broke Up, Citing "A Significant Amount Of Pain" After 'The Bachelor'
By Jordyn Tilchen
Get Even More From Bustle — Sign Up For The Newsletter