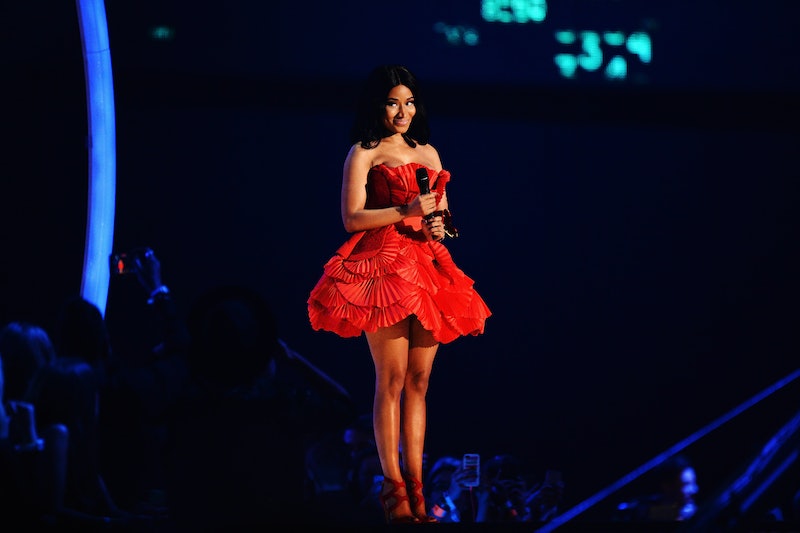 Since the release of Nicki Minaj's third album, The Pinkprint , on Sunday night, I haven't been able to stop listening to her new song "Grand Piano." Interestingly enough, the 32-year-old "Anaconda" hit-maker, who is, of course, best known for her rapping skills, spends the entirety of "Grand Piano" singing — and she sounds fantastic. It's certainly one of The Pinkprint's best tracks. But will Minaj perform the emotional, vocally challenging song live? That's a really good question. I'm not sure.

Though Minaj sings on several of her biggest hits ("Super Bass," "Turn Me On," "Starships, etc.), recently, she seems reluctant to sing during live shows. For example, during her set at the 2014 iHeartRadio Music Festival in Las Vegas in September, Minaj used back-up singers and a backing track during her performance of "Pills N Potions" — she just stood on stage and mouthed the words to the chorus. It was a strange choice, to say the least. Initially, I thought that Minaj might be avoiding singing in an attempt to rebuild her image as a "serious rapper." After all, the pop-influenced songs found on her last full-length album, Pink Friday: Roman Reloaded, did do some damage to her credibility within the rap community. However, she sings on a number of tracks on The Pinkprint, so I'm no longer sure that's the case.

Is Minaj just not confident enough in her singing ability? I suppose it's possible. After all, she rarely sings live without loud studio vocals playing behind her. I would love to see Minaj perform "Grand Piano" live with a pianist and a small strings section at some point in the future. I think that it would make a really powerful statement about both her talent and her commitment to making the kind of music she wants to make, haters be damned. Unfortunately, I'm not quite sure that she's up to the task. Of course, I could be wrong. We'll just have to wait and see. Check out "Grand Piano" below.

The Pinkprint is available everywhere now.