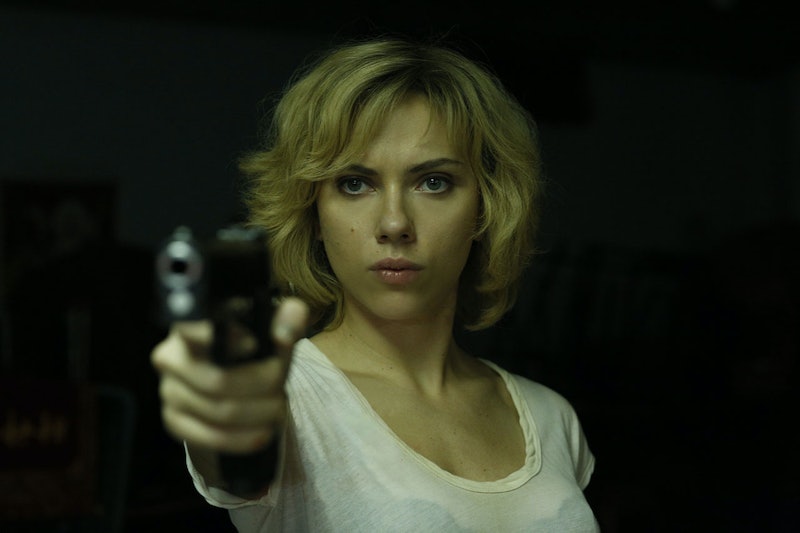 Hats off to the Critics' Choice Awards for recognizing a genre of film that goes unappreciated by some of the more esteemed awards organizations: action. So often shafted as “lesser” cinema alongside the likewise underrepresented parties horror and animation, action gets its due acclaim come time for the 2015 Critics' Choice Award nominations, which came out Monday morning in representation of the past year of film. The institute aims to looks back at 2014’s most noteworthy contributions to the genre, honoring action film in general alongside the actors and actresses that star therein. And it’s that latter category that is of particular interest this time around.

The year 2014 was a colorful one for action heroines. We got a first Divergent movie and a third Hunger Games . High hopes were dashed via Guardians of the Galaxy, low expectations were exceeded by Edge of Tomorrow. Marvel upped the ante with Black Widow in Captain America: The Winter Soldier, though fans clamored for a feature film all her own. And Scarlett Johansson proved a viable action commodity beyond the comic book banner. So how does this year’s slate of Critics' Choice Award nominees in the Best Actress in an Action Movie category reflect such a volatile 12 months?

Let’s start with the good. This year, CCA recognizes a few deserving parties in the gambit of alien-battling, tyranny-overthrowing, and physics-defying. One of 2014’s most surprising qualitative successes was Edge of Tomorrow, the Tom Cruise-led vehicle that rode on the premise, “Like Groundhog Day, but if Bill Murray was fighting outer space monsters.” Though Cruise showcased a charisma many of us had decreed long gone (he’s terrific at playing jackasses!), his screen partner Emily Blunt was the beacon of even greater celebration.

Blunt plays the war hero charged with teaching Cruise the ropes of reincarnative combat training, and a caustic foil to the latter’s smarmy smiler. Though she ultimately falls as second fiddle to Cruise, and can’t quite evade the grasp of the inevitable romantic twist, Blunt far outweighs the bulk of her action heroine company in character and performance — maybe the best of the year… but not without ample competition.

I’m talking, of course, about Johansson, nominated for her headlining turn in Lucy. Scar Jo plays a different sort of action archetype here: the sort usually occupied by Jason Stathams, Keanu Reeves-es, and other perpetually grimacing, affectionately sociopathic alpha males. Gratis of her “chemically evolved” character, Johansson is granted permission to march and shoot her way through a bonkers barrage of action and sci-fi imagery, not constricted by the sort of hesitation we usually (not always, but usually) see in the genre’s female characters. She doesn’t amount to a great piece of writing, but is indubitably a step toward demolishing the male hero’s monopoly on this sort of flick.

Of course, the Critics' Choice Award also made some more questionable choices with its Action Actresses nominees. The biggest eyebrow-raiser would have to be the nod for Zoe Saldana in Guardians of the Galaxy, an otherwise fun and charming movie that transformed an interesting comic book character and talented actress into a subjugated exposition box. Far and away the worst thing about Guardians (other than, perhaps, Lee Pace’s Ronan the Accuser), Saldana’s character is poorly-designed and remarkably regressive, especially for a film that prides itself on a modern voice and genre subversion.

Now, while I don’t love Shailene Woodley in Divergent, she is far from the movie’s worst element. Yes, Tris is a boring, effectively formless character, but Woodley’s charms augment her just enough to skirt the bestowal of chronic pain unto its audience. All in all, Woodley is a talent, and deserves better.

But others deserve better, too — namely, they deserve nominations in this category over Saldana and Woodley: Maika Monroe deserves one for her weighty but fun navigation of the clever genre throwback The Guest. In supporting roles, Emma Stone imbued The Amazing Spider-Man 2 with some much-needed personality, and Tilda Swinton was the best piece of the already terrific Snowpiercer. All viable choices that’d better serve the category than the obligatory mentions from the Marvel and YA slots.

And yes, Jennifer Lawrence occupies the list for the third year in a row. And yes, she’s fine. And yes, the very recognition of these stars — ones that might otherwise go wholly unnoticed by the awards circuit — is something to celebrate. But hopefully we can open up to some more interesting choices next time around. Or, if this isn’t being too idealistic, actually make the heroines of Guardians of the Galaxy 2 and the second Divergent movie more interesting.