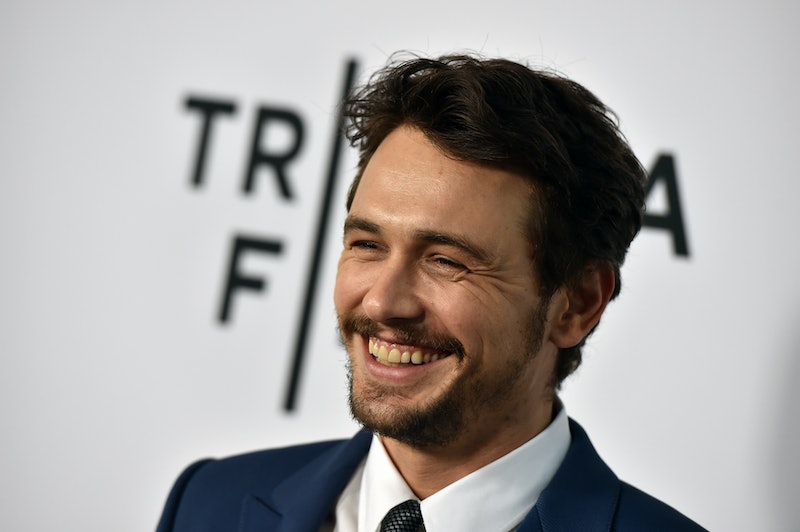 James Franco's recent SNL hosting gig poked fun at his eternally busy schedule. The Hollywood mainstay, who used to be known for his supporting roles and boyish good looks, is now littering the foreground of all things entertainment. He acts, directs, produces, teaches, writes, paints, sings and would likely jump at the chance to add another dozen verbs to that list. And now, the Interview actor created a feature film with some of the biggest names in Hollywood, directed by 12 of his students. Because when you're James Franco, why the hell not?

The Color of Time, the unconventional (and risky) film Franco crafted with 12 of his students during a course he was teaching at NYU, is based upon the life and work of Pulitzer Prize-winning poet C.K. Williams. The film follows Williams (Franco) and his adoring wife (Mila Kunis) as he struggles to write new prose, becoming haunted by memories of his past: His childhood, his mother (Jessica Chastain), his first sexual encounters, and his first losses.

I spoke with James Franco and one of the 12 directors of the film, Bruce Cheung, about the story's inception. "It came out of this idea to unite a class," Franco said about the initial idea. "Classes are all run in the workshop format — whether it's the art school or the writing school — so the students would make a project and bring it in and have it critiqued by their professor and film students. But unless you work on a collaborative film, you're not invested in someone's work," he said. "Yeah, you want your friends to do better and you help each other along, but if you DP on someone's film, then you feel like: 'Oh, this is kind of my film, too. I want this film to be really good.' So I thought: What if we worked on a film as a class together?"

The narrative, which begins with Williams as a young married man, moves backwards and forwards in time, woven together like patchwork. With each director claiming a section of the film as his or her own, Franco avoided a "too many cooks in the kitchen" scenario.

"The way it was structured allowed for a variety of voices while still allowing all these different voices to work in concert. You have these characters at the center, you have a central storyline, but then you have different episodes directors," he explained. "Each director had his or her jurisdiction, their section to work on."

For Bruce, collaborating with Franco was not only a chance to be mentored by one of Hollywood's elite, but have the talents of well-known actors at his disposal. "I worked on the section called 'From My Window,'" Cheung said. "It was a joy to work on because I had the opportunity to work with James and Mila, who have amazing chemistry. They showed up on my set right after shooting Oz [The Great & Powerful], in the middle of the night. I felt bad, but they have so much fun together, they improvised whole sections. It was awesome, I rarely work with such great actors, why not give them the freedom to express what their capable of."

But Franco and Kunis weren't the only heavy hitters to commit time to the picture. Academy Award nominee Jessica Chastain came aboard as Williams' mother in a series of sepia-soaked flashbacks that emote motherly love and fostering adolescent growth. Wish I Was Here's Zach Braff also signed on, finding relatability in Franco's ambition.

"Zach Braff had been through film school so he really appreciated the class. I think he was impressed by the ambition of this project, he was really happy to be a part of it. He even told me after that it was such a great experience, he loved the kids' attitude," he said, explaining that his involvement served Braff's own inspiration. "I don't know this — I won't take credit for all of this — but I think it pushed him to go and find a way to direct his next movie. He had been trying for a long time to get financing for it and I guess having a hard time. He was getting really frustrated waiting for a gatekeeper to say 'Yes, I want to make your next movie.' And so he found a way to make his next movie and I don't know if it's all because he saw we made it happen on The Color of Time, but I think it had something to do with that."

The Color of Time, filmed in Detroit after hours during Franco's time shooting Oz: The Great and Powerful, had a very minimal budget, unlike many of blockbuster flicks Franco's attached to. "People in filmmaking say that obstacles force you to be more creative. But sometimes when I hear that I'm like, 'Yeah, yeah, yeah...' But in fact it is very true." The directors were thrifty, using Detroit as a convenient, and as it turns out, ideal location for their film.

But what's more impressive than the thriftiness of production, was the array of female characters portrayed on screen. From mothers to friends to lovers and ultimately, a wife, this script offers more roles for females than males. Cheung spoke to this element: "We wanted to create strong female characters, and there's definitely a need for that in storytelling. It's one of my really big hopes for the near future."

The Color of Time is available on iTunes, Amazon Instant Video and On Demand now and is playing in select theatres from Starz Digital.

More like this
At 28, Melanie C Was Falling In Love & Reclaiming Her Confidence
By Olivia-Anne Cleary
At 14, Jurnee Smollett Was Taking Meetings With Missy Elliot & Lauryn Hill
By Chloe Foussianes
Lindsay Lohan & Jonathan Bennett Celebrated Mean Girls Day Very Differently
By Jake Viswanath
Alan Rickman's Diary Reveals Why He Considered Leaving 'Harry Potter'
By Darshita Goyal
Get Even More From Bustle — Sign Up For The Newsletter