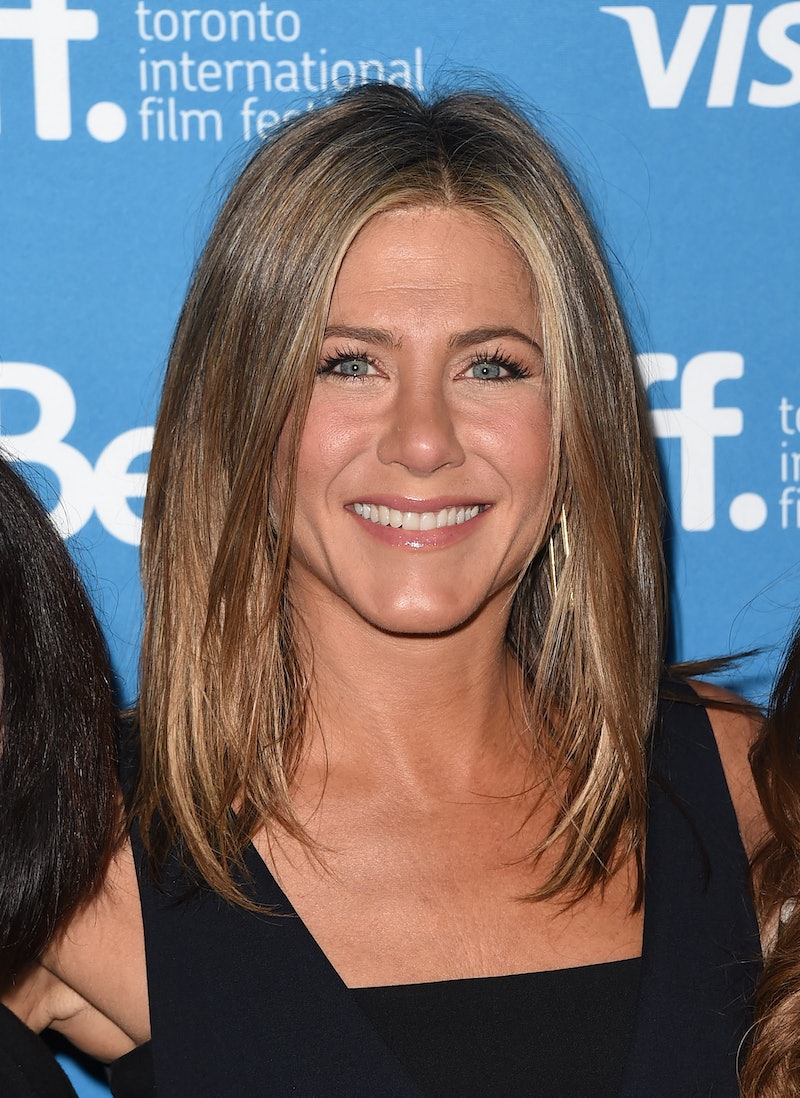 There's been some Oscar buzz surrounding Jennifer Aniston's performance in Cake, in which she plays a real person who doesn't look like a Hollywood starlet. What's Aniston's opinion on all of this? Covering the January issue of Allure magazine, Jennifer Aniston says that "going unattractive" for creative recognition is some sexist garbage. Who knew that Jennifer Aniston took her tea with some patriarchy-busting half-and-half?

In the Allure feature, Aniston discusses how she prepared for the role of Claire, a woman who develops chronic pain following a car crash. In addition to wearing a prosthetic scar on her face during filming, the actress reportedly stopped wearing makeup, stopped shaving, and stopped looking in mirrors (in other words, she adhered to the beauty regimen of a freelance writer). Very aware of the trope of beautiful actresses getting critical accolades for making themselves less physically attractive, Aniston addresses this theme in her own performance. In the article, she "scoffs:"

A woman going physically unattractive is where you get recognition and some sort of respect. You read things like, "Oh, finally, she's acting!"

Here, Aniston is addressing the cultural notion that actresses stripping away the glamour equals an Oscar. Sure, she's talking about a physical double standard in the midst of being made up and styled like a Hollywood doll, but she makes a good point. Basically, if you don't slum it in the beauty department, you're not a real actress. UGH! This is 2014 people. We're better than this.

Angelina Jolie (in Girl Interrupted), Charlize Theron (in Monster), Halle Berry (Monster's Ball), and Nicole Kidman (in The Hours) have all done versions of exactly what Aniston is talking about for roles. Whether with the help of prosthetic noses or just a general lack of typical Hollywood makeup, these actresses have all toned down their ridiculous good-looks and have been rewarded with Academy Awards. Sure, they all gave fantastic performances, but people seem to remember the "uglying up." This pattern substantiates that a woman sacrificing her beauty is inherently brave and should be rewarded with a gold statue. That association isn't just patronizing, it asserts a damaging mixed message — as if a woman's beauty is the primary thing she has to offer society, but that she can't be taken seriously until she casts that beauty aside. That, my friends, is some sexist BS. Rachel agrees.

More like this
UK Viewers Will Have To Wait To Watch The Handmaid’s Tale S5
By Maxine Harrison
Help! I'm Not Getting Any Attention On Dating Apps. What Can I Do?
By Sophia Benoit
The 12 Best Strapless Bras That Won’t Slip & Fall Down
By Audrey Williams and BDG Commerce
Berriez Founder Emma Zack On Her Size Inclusive NYFW Show
By Dominique Norman
Get Even More From Bustle — Sign Up For The Newsletter