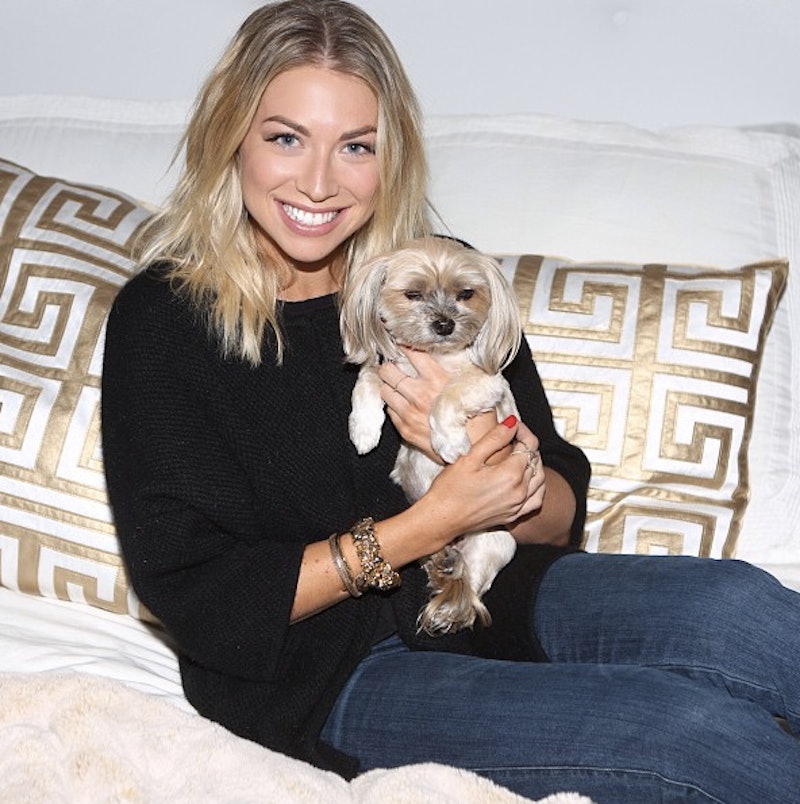 Heather Chandler, Regina George, Kelly Taylor, Cruella De Vil. What do all of these women have in common besides amazing style? They are mean girls, but they are so entertaining that you sometimes root for them over the so-called nice girls (well, except for maybe Cruella — no one is in favor of puppies getting skinned). And Stassi Schroeder of Vanderpump Rules completely fits into this group, even though she — unlike the rest of them — isn't fictional. Though she is often depicted as snobby and snarky on the hit Bravo reality series, she is also honest, smart, totally hilarious and absolutely charming. And the girl has an awesome sense of style (no one wears fancy shorts like Schroeder).

We weren't sure if we were going to see Schroeder for Season 3, after it was revealed her former bestie Kristen Doute had slept with her former boyfriend Jax Taylor. That's enough to send anyone packing. And she did pack her bags — all the way to New York City to be with her boyfriend Patrick Meagher. From what we could tell, she loved being in New York even though the couple's apartment was small (so small that she felt uncomfortable going to the bathroom there sometimes). So in addition to finding the best bathrooms at the closest Starbucks, she also developed a jewelry line with Prima Donna, and got into yoga (her favorite pose is pigeon!). We were a bit worried she would return for Season 3 too zen-ed out and in love to react to the craziness that is Vanderpump Rules. But good ol' Stassi is back and telling it like it is: "I'm not sure what I've done to you, but I'll take a pinot grigio" (a phrase that may be the new, "Keep calm and carry on."

She often expresses gratitude about not working there anymore, but she is still happy to hang out at the establishment, especially when certain celebs like Jennifer Lawrence stop by: "I absolutely adore Jennifer Lawrence so that was such a wonderful surprise. She is just so damn down to earth and likable!" But Schroeder says she would really, truly die if someone from The Walking Dead or Game of Thrones came in for an overpriced drink. Who knew?

As for the rest of the season, Schroeder was pretty tight lipped about the SUR gang, but she did give Bustle this scoop: "I can't really give any spoilers, but I can say that things with Scheana and me do carry on which eventually leads to a sit down. I do meet up with Kristen, and what she reveals to me shakes everything up for a lot of people."

But when asked to describe her personal journey for Season 3 through emojis, her answer of "the smiley face with heart eyes and a good princess emoji" leads us to think that she will come out on top, and possibly be sporting a tiara on a regular basis.

Speaking of bling, Schroeder has created a line of necklaces for Prima Donna. "I just feel like statement necklaces are so classic and feminine, yet bold and empowering at the same time. I think the 'Carbon' necklace is the perfect holiday piece for the girl who likes a ladylike Blair Waldorf kind of look. The 'Krypton' is wonderful for someone who likes to have a little bit of an edge with her style."

When Schroeder talks about her passion creating the line she appears even more excited then when she is about to tell someone off and make a dramatic exit. "This experience has been more magical than I could have ever anticipated. It's so crazy to dream up your vision for something in your head and months later find it in your hands. I just sit and stare at my pieces on a regular basis, not kidding, because for so long it has just been ideas, and now it's tangible! I've had the most wonderful feedback as well. Of course I was so nervous, because this line is like my baby!" She reveals.

Another lady who loves shiny, sparkly things is Lisa Vanderpump, Stassi's former boss and mentor. Schroeder recently styled Vanderpump for a magazine cover: "I had a great time that day! Let me just clarify, I'm not a stylist. I have a fashion blog and my friends often ask me to help style them for events and parties, but styling involves pulling clothes and accessories from different designers and putting together a specific look based on the vision of what the publication wants," she assures. "All I did was come over and help a sister out! I just had a fun time going through her closet and helping her look her best. Lisa styles herself and she's great at it."

As for whether she considers herself a feminist, it seems the answer is a definite yes (unlike her co-star/nemesis Scheana Marie). She tells Bustle: "I think women are such enchanting powerful creatures. I truly believe that we can do anything and am a huge supporter of the rights and equality of women. I feel like that is why I am so fearless when it comes to how I speak or act in different situations. I don't think I should conform to someone else's opinion of the way a woman is "supposed" to act or speak. I believe in myself, I believe that as human beings we are all on the same plane; therefore, I do not tolerate bullshit from people. So yes, I would definitely consider myself a feminist."

As long as being fearless means more epic one liners on the show, we are all about it Stassi!