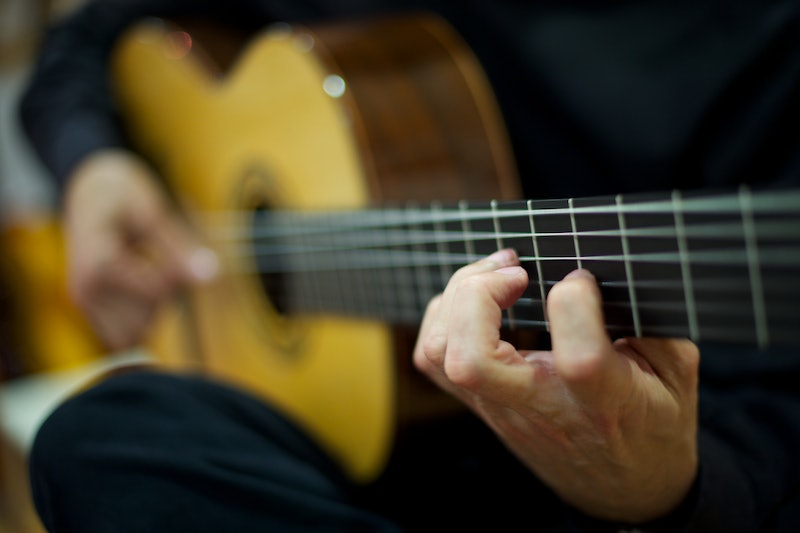 It's not uncommon to see people performing when you're traveling via mass transit in any given city. It is also not uncommon to marvel at people exhibiting all manner of crazy-isms on subway trains and busses 'round the world. It's like someone randomly decided that that is the proper forum for explore one's inner batshit insanity, and the rest became history. As ever, insanity and the arts are aligned. Take for example this dude playing guitar with a heaping side of crazy. To be clear, I would never make fun of anyone struggling with mental illness. That's not my game, and really shouldn't be anyone's game. That said, I don't think that's what we're looking at here. I think this dude is just being obnoxious for attention, and making fun of those people is very much my game. Just wanted to be clear about that.

Whenever someone gets on my train car with a guitar, I turn into a hostile old lady. Seriously, I assume a wrinkled scowl, my hair is magically in a bandana, and I'm suddenly clutching a broom and waving it ominously like the poor transient musician is a leaf about to fall onto my freshly swept lawn. I don't care if you're the second coming of Jason Mraz (bahaha, oh come on, you know the idea of Jason Mraz is funny), chances are, if I'm on the subway, I'm eager to catch up on my reading (light pornography, obvi), journaling (also light pornography, also obvi), or podcast-listening. (I do not listen to pornographic podcasts, but only because I'm not immediately aware of any? Get at me if you know of any.)

Something I don't want to do in the subway is have new musical talents forced upon me. If I enjoyed "new things," I'd probably have a smart-watch and walk around all day, spying on people with my Google Glass eyewear while eating a Paleo diet and downloading songs from The Voice as recommended to me via Spotify. I do none of these things, because I am a curmudgeon who is basically BaneCat:

That said, if some dude did a quick, impromptu, metal-scream acoustic guitar performance on my train car, I'd probably make it rain handsomely upon him because that really is kind of hilarious. I have always wanted to make it rain upon someone (in a strictly non-R. Kelly kind of way). Not only is his gimmick amusing and fast (the genius of his brevity really cannot be overstated here), but he's pretty much externalizing how I feel each time I am forced to take the subway. Shine you potentially-unbalanced diamond, shine on.

More like this
These 3 Signs Are The Master Chefs Of The Zodiac
By Kristine Fellizar
These 4 Zodiac Signs Make The Best Bridesmaids
By Nina Kahn
The Zodiac Sign Pairs Most Likely To Have A Sibling Rivalry
By Kristine Fellizar
25 Galentine's Day Games To Play On Zoom With Your Long-Distance Besties
By Mia Mercado
Get Even More From Bustle — Sign Up For The Newsletter
From hair trends to relationship advice, our daily newsletter has everything you need to sound like a person who’s on TikTok, even if you aren’t.