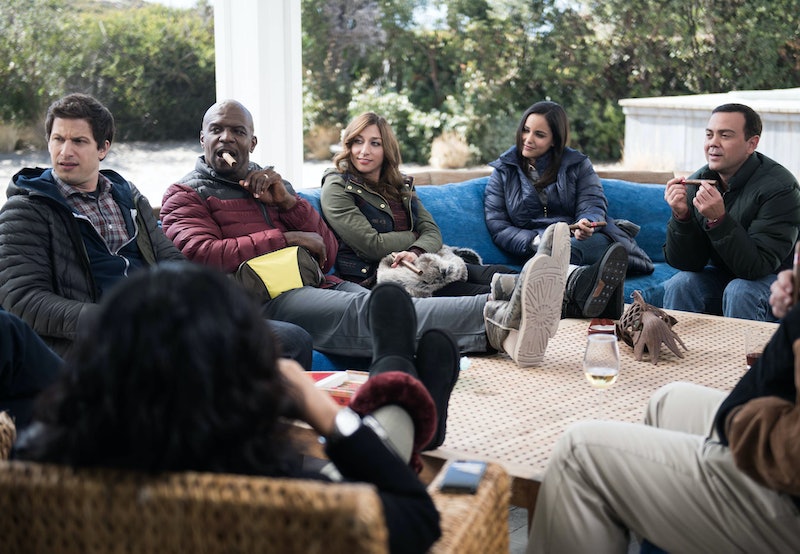 Brooklyn Nine-Nine may have had its mid-season finale last Sunday, but guess what? It'll be back in less than a month! Get this: Brooklyn Nine-Nine is set to air its mid-season premiere on January 4. Unlike most network shows, which generally bow out for a month or more at a time (and don't even get me started on cable shows like Game of Thrones that disappear of the year for ten-month stretches of radio silence), your favorite police precinct will only be on hiatus for three weeks — actually, a mere two weeks from today. Besides, with all the hustle and bustle (not to mention the multiple viewings of It's A Wonderful Life, The Nightmare Before Christmas, Love Actually, et al), the time is sure to pass quite quickly.

That's not to say it won't be tough to live without our favorite show, though: What's going to happen with Charles' dad and Gina's mom? Ooh, or Rosa and Holt's nephew (I don't think I'll ever get enough of Awkward Officer Diaz's and Awkward Captain Holt's mutual embarrassment regarding the subject)? How about Jake's new girlfriend, Eva Longo— I mean, Sophia? Will we get to see more of Captain Holt's epic rivalry with Deputy Chief Madeline Wuntch? Plus, there's all the Jake and Amy 'shipping (honestly my favorite ship on TV right now; PLEASE HAPPEN SOON), Rosa's general badassery, Terry's slightly terrifying children's book illustrations — there's just so much to look forward to. There's definitely a reason why the gang just scored a SAG nomination for Outstanding Performance by an Ensemble in a Comedy Series, and all I can say is thank goodness they won't be off the air for long.

There is one tiny drawback to this short mid-season hiatus, though: It might mean that we're going to have a longer summer hiatus. If last year's Season 1 is any indication, we might be in for quite the wait this summer — last year's finale aired in March, and by comparison most network shows typically wrap up around May. An early end would be nice if there was an early beginning to go with it, but alas, we didn't start Season 2 until mid-September (a half year without Brooklyn Nine-Nine? The horror!). Oh well — the more B99 we can soak up right now, the better. Who cares about four months from now, anyway?