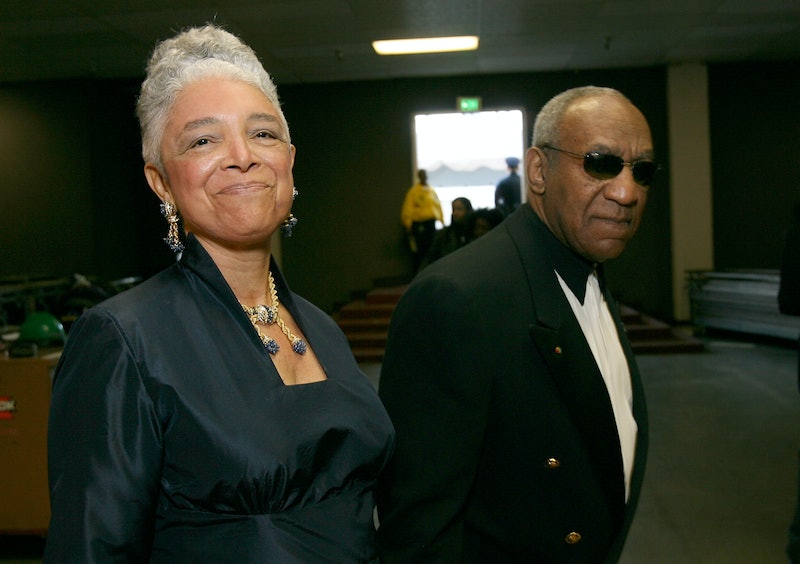 With Bill Cosby's rape accusations in the double digits, Camille Cosby has finally broken her silence on her husband. In a statement published by ABC News, Cosby addressed the allegations against the legendary comedian, and the media treatment of it all. From her statement, which you can read in full below:

The man I met, and fell in love with, and whom I continue to love, is the man you all knew through his work. He is a kind man, a generous man, a funny man, and a wonderful husband, father and friend. He is the man you thought you knew.

A different man has been portrayed in the media over the last two months. It is the portrait of a man I do not know. It is also the portrait painted by individuals whom many in the media have given a pass. There appears to be no vetting of my husband's accusers before stories are published or aired. An accusation is published, and immediately goes viral.

She then brings up the UVA campus rape scandal, and the journalistic fallout after Rolling Stone published an article that was far less than thoroughly vetted for veracity.

But Camille Cosby's comparison to the UVA situation hardly holds up — unlike with Sabrina Rubin Erdely's reporting from UVA, many publications have reached out for Cosby's side of the story; he's hardly given it. In fact, Bill Cosby has remained largely silent through all this, speaking only very rarely, like in the small interview with the New York Post's Stacy Brown published Friday. That time around he asked for neutrality from the black media.

Washington Post's Alyssa Rosenberg wrote a piece in response to that interview, which is even more relevant to Camille Cosby's statement:

On the face of it, this is a reasonable request. If we needed a reminder at all, Rolling Stone’s badly botched story about sexual assault at the University of Virginia is the perfect argument for why coverage of sexual assault requires compassion, rigor and a passion for the facts. The first-person accounts from women who say Cosby attacked them, but who did not file police reports, cannot be bolstered by interviews with law enforcement officials, university deans or emergency room doctors. But at least outlets like Vanity Fair and The Washington Post did what Sabrina Rubin Erdely did not and have given Cosby and his representatives a chance to respond to the charges in the pieces. In both cases, Cosby declined the opportunity.

Take the case of Vanity Fair publishing an essay by Beverly Johnson recounting an alleged encounter she had with Cosby and accusing him of drugging her: That essay came along with an editor's note that read that "Cosby’s attorneys did not respond to Vanity Fair’s requests for comment." Bustle reached out when comedian Hannibal Buress re-ignited the issue, calling Cosby out in an October show.

But what is Cosby really asking for here? Should reporters display “a neutral mind” by covering each allegation as if they are independent from one another, rather than indicative of an alleged pattern of behavior? That’s a suggestion that casts objectivity as a kind of repetitive amnesia. If Cosby’s understanding of 'the standards of excellence in journalism' requires reporters to get comment from all parties to a story, should Cosby’s repeated refusal to respond to the allegations against him mean that outlets can’t report on those allegations at all?

It's hard to raise all party's voices equally when one voice is remaining very relatively silent. And as Ta-Nehisi Coates pointed out — and as Rosenberg quoted in her piece as well — it's not one voice against one voice; it's one voice against at least 25, at this point.

How do you balance that?

You can read Camille Cosby's full statement below: