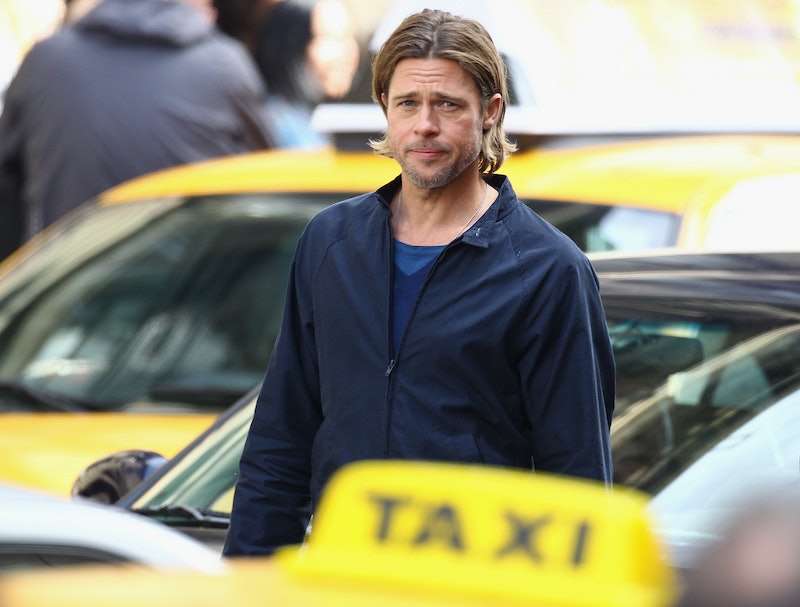 Brad Pitt might be one of the most handsome men on earth (objectively agreed upon) but when you give him a microphone, he just tears into your run-of-the-mill, teasing, and insulting dad. At Rihanna's Diamond Ball last week at the Vineyard in Beverly Hills, Pitt made some goofy fake jokes about Rihanna's career: "Since turning the ripe age of 26, Rihanna, sadly, has only had 13 number one singles." Nice, a quality joke, Bradley.

But even though he was being sarcastic and irreverent, does Pitt really have the right to riff on Rihanna's young age? She's simply killing the game at 26. Pitt, on the other hand, was not so lucky so early on in his career. Even though now he's one of the most notable and recognizable actors in Hollywood, he didn't exactly start off smooth sailing. His hunky hitchhiker role in Thelma and Louise didn't come until 1991, when Pitt was 28. A whole two years older than RiRi with a baker's dozen of number ones. So let's take a look at what kind of roles Pitt was collecting when he was in his twenties. It's a hard time for anyone (unless you're Rihanna), so I won't be too hard.

A 24-year-old Pitt played a wholesome b-baller on this Midwestern-set soap opera.

A hunky Pitt plays a hunky boyfriend with wavy blonde hair on the long-running Texan soap.

Even Brad Pitt had to do a TV movie. He plays an evil boyfriend Billy Canton in this made for TV movie costarring with Juliette Lewis.

Another soap-opera-y show, Pitt plays... a high school student. At 27.

This is the one that made us go, "Hm, Brad Pitt." He plays the infamous handsome hitchhiker (a myth).

More like this
Twitter Is Freaking Out Over Rihanna’s 2023 Super Bowl Halftime Show Announcement
By Stephanie Topacio Long
What Does Nancy Jo Sales Think Of 'The Real Bling Ring'?
By Arya Roshanian
Netflix Reveals First Look At Wednesday In The 'Addams Family' Spinoff Series
By Bustle Editors
The Spice Girls Just Dropped A Brand New Music Video
By Sam Ramsden
Get Even More From Bustle — Sign Up For The Newsletter