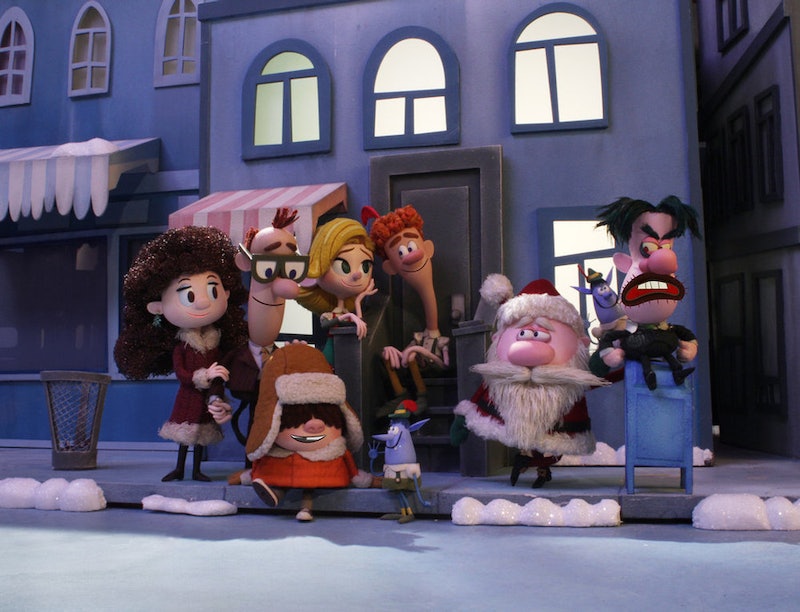 NBC has been going retro recently, first with Peter Pan Live! and now the channel is bringing back the stop-animation Christmas special with Elf: Buddy's Musical Christmas. The 2003 Will Ferrell film is already a holiday classic, so is the cast of Elf: Buddy's Musical Christmas from the movie Elf ? Unfortunately, for fans of the film, there will only be one familiar voice from the movie, but that doesn't mean you won't recognize the other voices. Jim Parsons will be Buddy, Star Wars' Mark Hamill will take on James Caan's Walter, and Garfunkel and Oates' Kate Micucci will fill Zooey Deschanel's adorakable shoes in the role of Jovie. Fred Armisen, Gilbert Gottfried, and Matt Lauer round out the eclectic cast.

But none of those people were in the film. The one guy who couldn't be replaced is Jolly Old Saint Nick himself — Santa Claus. Ed Asner — who played Santa in the original film with his trademark gruff — will be reprising the role for the stop-animation TV special. Although I would love to hear Ferrell return to play Buddy, I can be satisfied knowing that Santa hasn't changed. And isn't that kind of what part of Christmas is all about anyway? Everything else changes from year to year, but Santa is a constant.

Rachael MacFarlane, best known for lending her voice talents to Family Guy and American Dad! (she is Seth MacFarlane's sister after all), will be providing the voice for Emily — Walter's wife. Emily was portrayed by Mary Steenburgen in the film because she apparently loves portraying Will Ferrell's mom/stepmom (thanks to Elf and Step Brothers). And I mean, really, who wouldn't love being a mom to a childlike, giant man baby?

There will also be no Bob Newhart, no Amy Sedaris, no Jon Favreau cameo (he directed the 2003 film), and no Peter Dinklage in the NBC TV special. But as the title hints at, Elf: Buddy's Musical Christmas will have a lot more singing than the original film — with nine songs from the Broadway show Elf: The Musical. And of course, the special also has a talented cast that doesn't need to be constantly compared to the movie ( . . . my bad).

And let's be real, although it's Buddy's story, the magic of Christmas falls to Santa. And Santa will narrate Buddy's tale of finding his father Walter. (In the film, Buddy's adoptive father, Papa Elf, narrated.) Asner is no stranger to doing TV — or voiceover work. His role as Lou Grant on The Mary Tyler Moore Show (and his own spinoff Lou Grant) is a classic and has made Asner the go-to man for cantankerous characters who end up being a softie at the end. As for his voiceover work, he has provided voices for the animated TV shows Batman: The Animated Series, Captain Planet and the Planeteers, Spider-Man, and The Boondocks (to name a few). And of course, he voiced grumpy Carl in the animated film Up.

Asner is an icon, so it makes sense he is taking up on the iconic role of Santa again. (He even voiced Santa before Elf in 1996's TV movie The Story of Santa Claus alongside Betty White.) So although you may be missing Ferrell and co. while watching Elf: Buddy's Musical Christmas on Dec. 16 at 8 pm, know that the man in the red suit hasn't changed.