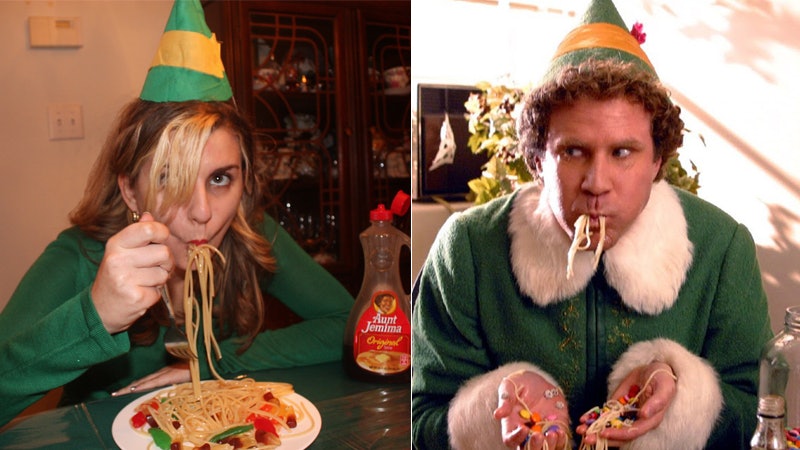 "Buddy the Elf, what's your favorite color?" Ever since I first heard that line while eating chocolate chip cookies on Shelby Goldsmith's couch, I was sold. Elf, the 2003 film about a human raised at the North Pole, is the last of the true Christmas classics, so when I heard Jim Parsons was voicing my favorite Christmas zealot for Tuesday's TV special, it felt sacrilegious. Not just anyone can easily fill Buddy's gigantic slippers, and to prove that, I spent an entire day living like an elf.

The code of elfdom is primarily based around spreading Christmas cheer, and that is...quite a challenge for me, someone with a very different worldview than Buddy. I'm a misery chick: Bitter, negative, and antisocial by nature. When I was younger, and this is not a joke, kids on the playground would sing, "You're a mean one, Mary Grace." For double the LOLs, I casted my friend Jennette to be deadpan gal pal Jovie, Jennette being the girl who's actual life motto is "Smiling's my favorite."

Certainly our work was cut out for us, dealing with personality handicaps right off the bat, and multiple other tragedies slightly further from the bat. But as you're about to find out, I was determined to embrace that wildly grinning Christmas spirit fully, in spite of my usual cynical nature. After all, there's room for everyone on the nice list.

The day started like any other, with me waking up screaming and covered in hives.

I'm kidding, of course. The rash actually started after breakfast, when I had changed into my outfit. I panicked, worrying: I'm so cantankerous, was this my body physically rejecting Christmas cheer? Spoiler alert: No. We later (MUCH later) deduced I was having a severe allergic reaction to my mustard colored tights. Fun!

It's my fault. I cheaply put together a Buddy costume by shopping around in discount stores, you know, any place where fashion goes to die. Jennette instead got her pink lace Jovie dress at Urban Outfitters. Yet both of our tights were from the same store...who even knows.

The hats were created after another mild emergency. Jennette's car broke down in the morning, refusing to open and sealing our adorable felt caps within. We were forced to haphazardly paste fabric squares onto party hats. And after having a lunch of gum drops and Benadryl, Elf Day could officially start.

Jennette and I initially planned on making paper snowflakes, before mutually realizing that Pinterest projects don't manifest themselves in the real world. Instead we bought a smattering of sparkly acrylic flakes and hung them around my living room. My mom was so fake-happy about that.

We then ventured on the Garden State Parkway, past the Eatontown Applebee's and through the convoluted overstuffed parking lot to get to the most magical place in New Jersey: the mall. At this point, the rash had consumed my entire torso, painting my cleavage a deep, Christmassy red. Am I dying? I thought to myself. I hope I'm not dying, because I probably won't make deadline. I did not die, so we decided to visit Santa Claus.

While on line with hoards of children, I mentioned that I keep seeing people our age getting engaged and/or pregnant. We laughed and laughed and felt dead on the inside. Finally we got to take the above picture with a very happy St. Nick. While high-power enthusiasm was displayed the entire time (I practically bounced into his lap), I did not call him out for sitting on a throne of lies, nor scream about how I know him. Ultimately, I still have to go back to Macy's to pick up some gifts. Restraining orders will make that difficult.

But don't think we half-assed living out the movie. Like Buddy in the film, we were mistaken CONSTANTLY for Christmastime employees. Yes, those hachet-job hats are all HR could afford.

And we made sure to order the World's Best Coffee, a caramel brûlée latte in my case, because I am the whitest chick in town.

And, of course, we went window-shopping, looking at all the beautiful Christmas trees.

Things were looking up, and before we retired for home, we made sure to pick up some ingredients for dinner. Oh, yes. You better watch out.

Elves try to stick to the four main food groups: candy, candy canes, candy corn, and syrup. Three of those things were easily obtained, but candy corn is tragically seasonal. We decided to improvise though, and went with Swedish fish for garnish. Then we shoved our super saccharine meal down our throats.

To summarize the spaghetti-and-maple-syrup experience: It's perfectly edible, but unless you're trying to make a mad dash toward diabetes, there's no reason for it.

And what better way to wash down a boatful of sugar than with more sugar? I utilized all of my baking skills (i.e., put dough on a sheet) so we could have some treats. We screened the film to end Elf Day right, but not before cramming 11 cookies into the DVD player.

When I watched the film again, I realized Elf is all about how Buddy tries to negotiate his tremendously sweet lifestyle with the the grayer realities of the human world. I, likewise, was trying to bury my bitter nature and adopt that persona, while getting crushed by the grayer realities of the human world. I have to say, though, for every side-eye in the perfume section, there were several people genuinely delighted by our costumes. All the smiling (SO DIFFICULT), the decorating, the silly hats, and cheerful banter paid off.

It's not easy to be Buddy the Elf in a world so consistently cold, but sometimes you need that crazed sugar rush of optimism, enthusiasm, and good will to get you through the holidays. So when the season has you feeling stressed, angry, anxious, confused, or like a cotton-headed-ninny-muggins, think to yourself: What would Buddy the Elf do?