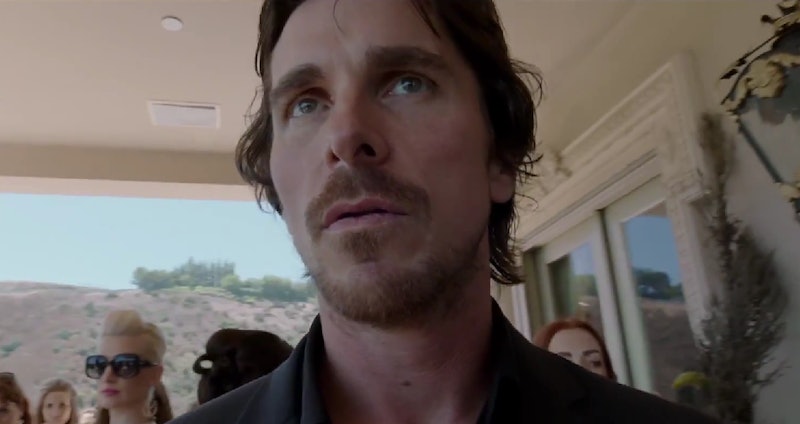 On the surface, the first trailer for Terrence Malick's Knight Of Cups — starring Christian Bale — looks like another introspective look at what it means to be a major movie actor in Hollywood. It's got Bale's character rolling around at lavish parties with women and walking movie sets. Then it gets to more emotional stuff, featuring Cate Blanchett and Natalie Portman as women he alternately fights with and canoodles with on beaches.

Once there was a young prince whose father, the king of the East, sent him down into Egypt to find a pearl. But when the prince arrived, the people poured him a cup. Drinking it, he forgot he was the son of a king, forgot about the pearl and fell into a deep sleep. Rick’s father used to read this story to him as a boy. The road to the East stretches out before him. Will he set forth?

What. Does. That. Even. Meaaaaan?

Now that you've been sufficiently and thoroughly confused, you can watch the trailer below. Hey, at least Christian Bale doesn't look like he starved himself for this one?

More like this
Paul Mescal, Man Of Mystery
By Samantha Leach and Heather Hazzan
12 ’90s Movie References You Missed In 'Do Revenge'
By Radhika Menon
What’s New On Netflix: Ana De Armas’ 'Blonde' & A Nick Kroll Special
By Arya Roshanian
These 25 International Horror Movies On Netflix Prove Fear Is A Universal Language
By Bustle Editors
Get Even More From Bustle — Sign Up For The Newsletter