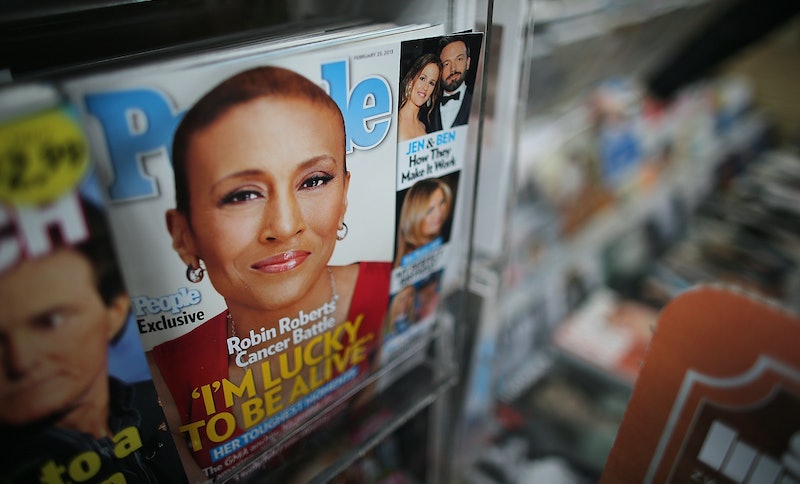 People magazine — the iconic magazine that I grew up reading every Saturday (thanks for having a subscription, Mom!) — is now joining the awards game. Yes, you read that right, on Dec. 18, People will have their own awards show, which begs the questions — how are nominees chosen for the People Magazine Awards (and the winners too for that matter)? All of this could be just another award show that lets us watch celebrities in fancy outfits, but I'm hoping the show will have more substance than that. Oh, People magazine, please do not let me down.

People joined forces with NBC and Dick Clark Productions to create the two-hour long show that will take place at the Beverly Hilton Hotel. They claim to be "honoring the most notable people of the year" with categories like Performance of the Year, Comedy Star, Breakout Star, and Sexiest Woman (phew, and good thing since I'm sure all the women were jealous of Chris Hemsworth getting all the attention).

But as much as I tried to discover not only how people were nominated, but who was actually nominated for these awards, I failed in finding out these apparently high-security People secrets. They can hype the awards show all they want with listing the celebrities that will be there, and with Nick Canon as a host, but I want to know what's really going on here!

One of the things that I do appreciate about People is the fact that they take time to recognize non-celebrities who have really made a difference either in their communities or on a larger scale. Actress Diane Guerrero (from Orange Is the New Black) will present Nora Sandigo with People 's Hero of the Year Award at the show for her work in advocating for immigrants and their families. Sandigo particularly focuses on children who were born in the U.S. but whose parents are immigrants facing deportation (which is what happened to Guerrero). If handled the right way, this could be one of the most touching moments of the awards season. Yet, still, I could find no information specifying how Sandigo was chosen for this award. Although the fact that she is the legal guardian to 817 children is reason enough for me.

Of course, that's the only non-celebrity we currently know will be celebrated in the midst of tons of famous people and performances that include Maroon 5 and 5 Seconds of Summer.

There is one fan-voted award for Best People Magazine Cover of the Year, which I couldn't help myself from voting for. Fans of the magazine can vote for their favorite cover (out of the 10 covers People chose) through their website or on Twitter using #PEOPLEMagazineAwards. Right now, the Robin Williams tribute cover (which was my vote as well) is in the lead. Not to be too cynical, but I feel like that's winning because of what a beloved comedian Robin Williams was, not necessarily because of the content in that week's magazine. But either way it's a testament to the late-great Williams and the famous magazine brand as well.

And just as I was just getting all disgruntled about the show, People reminded me why I love them with this Tweet:

Gah! I am missing The Mindy Project! And I would love to see Mindy Kaling and Chris Messina in red-carpet garb. Oh, you got me again, People — you just know me too well. Guess my glass of wine and I will be seeing you this Thursday, Dec. 18 at 9 p.m. on NBC. Even if I have no idea (with the exception of Sandigo) who the hell is being honored.