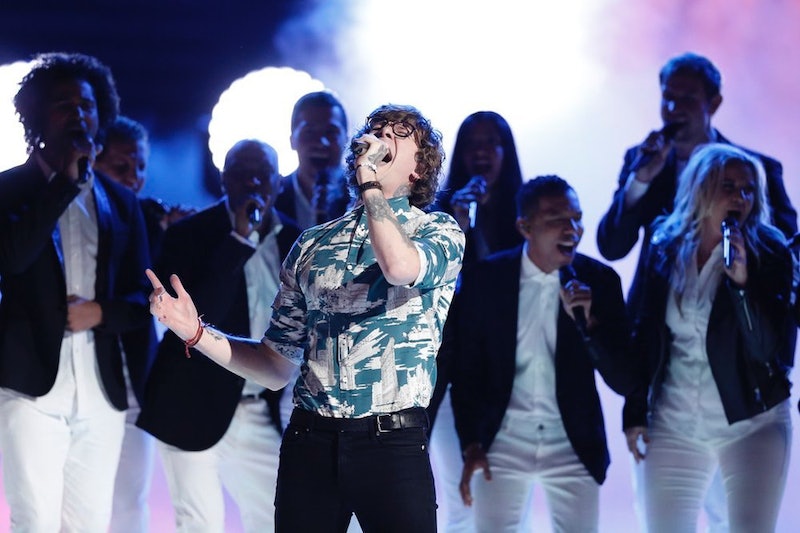 Matt McAndrew was destined for stardom. And thanks to Adam Levine, he could have just that. The rocker has been a favorite of many since the beginning, thanks to his hipster style and out-of-this world performances. There was no doubt that any single Levine chose to produce with McAndrew would be a hit, but "Wasted Love" is one of the greatest songs out right now. I've been calling Damien the winner for a few weeks now, but this performance changed my mind. McAndrew is exactly what the music industry needs right now, and that's why he could win The Voice.

The challenge of preparing an original song for each contestant probably proved very difficult to Adam Levine. With three contestants in the finale, Levine had to choose his team's songs wisely. He had to make sure they were different enough but still competitive. There's no question, though, that Levine has a favorite — and that favorite is definitely McAndrew. It was not only evident in his praise of the artist — we all noticed that subtle slip of him naming McAndrew the winner — but in the choice of song, too.

Fog machine and giant choir aside — even though that was pretty amazing — "Wasted Love" is made to be a chart-topper. It is an all-around well-written song that can be appreciated and loved by all fans of music, not just one genre. And McAndrew's stamp on it, mixed with his jaw-dropping performance, puts it way above any other contestant's single.

Gwen Stefani said it best when she said McAndrew's performance was truly inspirational. He has been a standout performer since the beginning, but this was truly McAndrew's best performance yet. It was evident that he believed in this song and that it meant the world to him. No other artist in the music industry could have performed that song like he did, and that's what makes it so special. If America loved that performance as much as the judges and I did, then McAndrew will definitely take home the win.

More like this
Kesha Is Down To Be The Next Bachelorette
By Jake Viswanath
How Ghosts Inspired Kesha’s New Music
By Jake Viswanath
Jason Derulo Is Launching A New Singing Show In The UK
By Maxine Harrison
The 'Love Is Blind' Season 3 Trailer Teases A Possible Fiancée Swap
By Kadin Burnett, Grace Wehniainen and Gabrielle Bondi
Get Even More From Bustle — Sign Up For The Newsletter