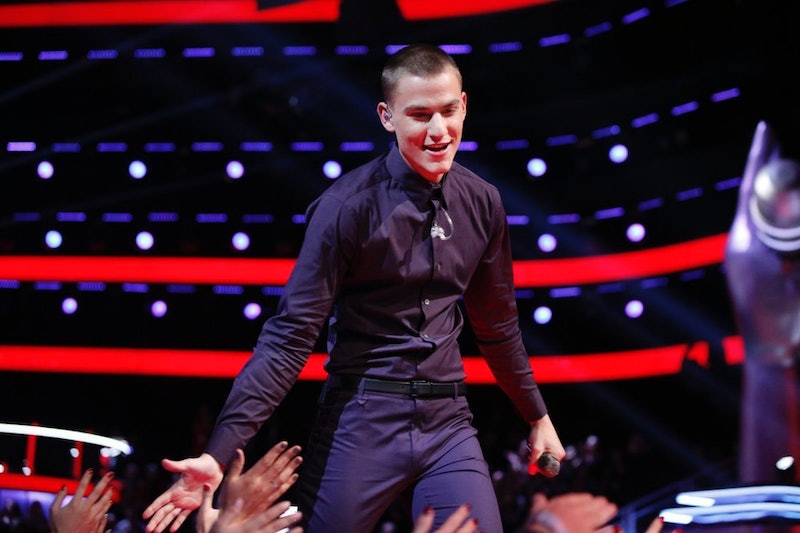 This season has some of the most talented performers The Voice has ever seen. They have years of experience, and some already have their own albums. Because of this, though, Chris Jamison has fallen into the background. Don't get me wrong, the aspiring pop star is full of talent, but he lacks the experience and professionalism needed to win this competition. There was hope for him to leave a big impression on The Voice stage tonight with an original song, but Jamison's new single "Velvet," though a great song to dance to, fell short of his competitors' inspirational, made-for-them, sure-to-be hits.

Jamison is a hell of a performer, but he's not confident in his own style yet to make a song really his. This was evident in "Velvet." The high falsetto parts of the song were clearly aimed to showcase his talent, but that's the only part that screamed "Chris Jamison" to me. Though this song has never been performed by another artist, I couldn't help but hear Levine's style weaved into the vocals, rather than Jamison's. It could be that they just have extremely similar styles, but it's most likely because Levine coached his team member through his entire performance and sang the song to him in the way in should be sung. A more seasoned professional would have taken what they heard and added their own style into it, like fellow Team Adam member Matt McAndrew was able to do.

Though he doesn't have what it takes to win this competition, Chris Jamison is most likely the artist that learned the most throughout the season. Because he's so young and doesn't have the experience of artists like Craig Wayne Boyd, Jamison was really able to take his coach's advice and try new things. It is extremely clear that he gained an extreme amount of self-confidence throughout this process — and some pretty sick dance moves. He might not win, but Chris Jamison will certainly take everything he learned on this show and work on becoming a better artist, and there's no doubt we'll see him on the charts in no time.

Watch the video for "Velvet" below: