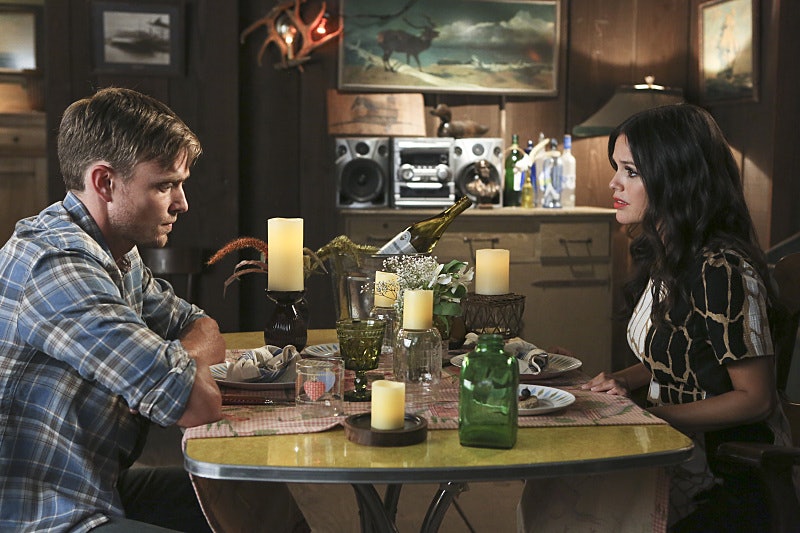 We all saw this one coming right? I mean, we knew that Hart of Dixie would address Rachel Bilson's real life pregnancy — and we also knew that obviously it was going to be a Zade baby. Because any other situation would cause an uproar amongst Dixie fans like nothing that's been heard before by The CW. But, to be quite honest, I expected Hart of Dixie Season 4 to handle the pregnancy better. Actually, I expected it to handle Zade's reunion better. Overall, the Hart of Dixie Season 4 premiere didn't do anything to make us love Zade or feel for Zoe's pregnancy news. In fact, it kind of made Zoe look extremely weak.

Now, don't get me wrong here, I'm a huge fan of Hart of Dixie and I'm a huge fan of Zoe and Wade, both together and apart. But it seems like they've officially started bringing out the worst in one another and my biggest fear has been realized — Wade is scared of giving Zade a second chance because he doesn't think Zoe's changed. And it's quite possible that's he totally right. The first half of the Season 4 premiere had Zoe trying to force Wade into admitting his love to her by starting their new relationship in the same place as their old one — with sex. Which is entirely problematic, regardless of whether or not that's where Zade realized their true feelings for one another in the first place.

And Zoe wasn't about to let everything happen organically, either. She was trying to force Wade into falling in love and into a relationship with her again. Which is exactly the same thing she did with Wade and his band — though her heart was in the right place, she pushed him over the edge — and it backfired. Wade wasn't ready to get back together because he couldn't trust that she'd changed as much as he had since their relationship crumbled. And here we all were with Zoe throwing herself at Wade, being the opposite of the woman we love. It was sad, almost, to see her flailing that way.

It was even sadder still when Hart of Dixie revealed Zoe's pregnancy in the final moments of the premiere and made it obvious that it's Wade's baby and she has no intention of sharing that information with him. After an eight-week time-jump, Wade turned up on her door ready to give their relationship a shot and Zoe turned him away. Essentially, Hart of Dixie is exactly where it left off when Zoe and Wade broke up the first time, making it totally obvious that while a Zade reunion might happen in Season 4, it won't be easy. And neither of these two characters are ready or have changed enough to make it work.