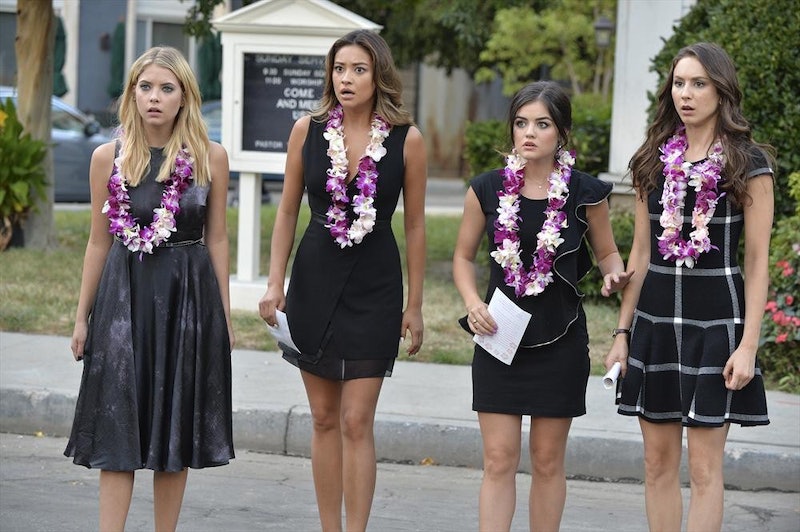 Ah, Rosewood — you'll always be a town filled with more questions than answers, won't you? Part of the magic of the show is that it leaves you wanting more — like nicotine (or meth). Case in point: The inaugural Pretty Little Liars Christmas special was the perfect combination of scary and satisfying — it was like some good, old-fashioned suspense jumpiness all tied up with a big red bow. Sure, it was a great hold-over between the midseason finale and the midseason premiere, but I'm already starting to get antsy. It's three whole weeks until we get to start PLL Season 5B and spoilers will have to hold us over for "Through a Glass, Darkly" (which airs on January 6), but I don't know if I can make it that long.

After all, there's so much ground to cover. First and foremost — did Ali kill Mona? The question is sure to loom heavy over the second half of Season 5, but I don't know if we'll be getting an answer or not. There's a lot that us fans aren't privy to (only I. Marlene King has all the answers. She's the real 'A' here!), but there are a few tidbits she's left behind like breadcrumbs. So, let's go: here's pretty much everything we know so far about (semi-spoilers, if you will) Season 5B of Pretty Little Liars:

Thank goodness. Guess those letters she and Hanna found in the DiLaurentis mansion was enough to get her out of jail — thanks, Mona (also, RIP)! Speaking of which...

Ali's Coming to Mona's Funeral in a Summer Frock

Girl certainly knows how to stand out, doesn't she? What's it mean? Does Ali's flaunting disregard for the social norm of black at a funeral mean she killed Mona? Is she celebrating Mona's death? Or would that be too obvious?

Apparently, the little liars will be spending a good portion of the episode trying to track down evidence that will prove that Ali killed Mona — but will they be successful? Knowing this show (and Ali's off-the-charts craftiness), I kind of doubt it.

Mona's Still Going to be Around

Here's one silver lining, though: Janel Parrish fans need not despair, because still be making regular appearances on the show, though this time as the dead girl-in-residence (she's taking the mantle over from formerly presumed-dead Ali). That said, can Ghost Mona become a regular thing too? How awesome would it be if we got a little bit of a Drag Me To Hell subplot with Ali and Mona?

Mrs. Grunwald's Also Going to be Around

Speaking of the supernatural... Mrs. Grunwald and her preternaturally piercing blue eyes will also be coming back into the fold. Maybe she can help illuminate the path to 'A' — she is a psychic, for goodness' sakes.

College Is Coming Into Play

College has always been something that's existed in the background of the show (after all, it started when the girls were all in their junior year). It's come up a few times, most notably re: Spencer's heart-shattering rejection from U Penn, and Paily's Stanford saga, and Hanna's high SAT scores, but it will apparently be playing a much larger role in the upcoming season, and may throw a little of 'PLL's signature drama Ezria's way (alas).

There Will Be Lots of Romantic Turmoil

As noted above, Lucy Hale's mentioned in multiple interviews that things post ultra-romantic Christmas special will be very rocky for Ezria. Add that to the fact that Paily may very soon be kaput, and the fact that Toby's new position as a police officer puts distance between him and Spence, and you've got legions of a very sad PLLArmy.

Haleb, you're our only hope!

Is it Ali? Aria? (Hey, there's more evidence for it than you'd think). Apparently, Keegan Allen already knows, but we're going to have to wait until Season 6 to find out for sure.