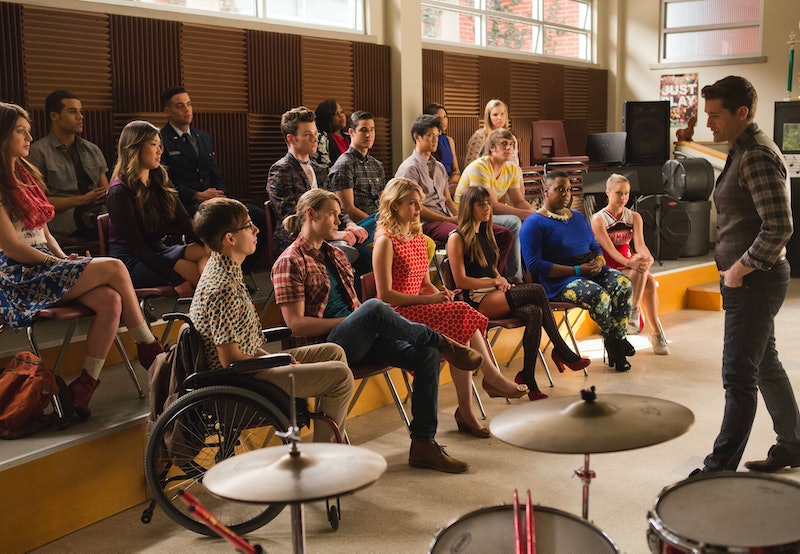 Get ready to be emotional because the Glee season 6 promo is here and it might possibly make you cry. But, like, in a good way. The final season of the hit show doesn't start airing until January 9, but thanks to a 20 second clip we already know a little bit about what's in store for us. There's been a lot of talk about having the show return to the basics that made Season 1 great; I thought that was a perfect idea, and I'm glad to see just how true they've stayed to that mission.

Glee hasn't been the same for a long time. Not only did Cory Monteith pass away, but there's just been too much back and forth in location, character development, and story line. First we were focused on the new glee club after the original cast graduated, then the newbies were unceremoniously dumped and we moved to New York for what seemed like a permanent journey, and then it was out to LA for a little while. But now the show is firmly back in Lima, Ohio and there's other no place I'd rather be.

Going back to the start with the perfect way to both honor and end the show and based off the promo we can expect to see these Glee staples again soon.

OK, so she had a few of these in New York, but now she's singing Frozen songs back on the old glee club stage. Her "Let it Go" rendition is amazing and a perfect way to kick off the final season.

Sue just does not want glee club to be a thing, but Rachel and Kurt are going to take her down. It may not be Will vs. Sue, but Sue vs. glee club is a time-honored tradition no matter who is waving the battle flag.

Blaine Warbler is back in his snazzy suit with his backup arrangement and life is aca-awesome.

It feels like just yesterday we said goodbye to those weird brown walls and plastic chairs, but the glee club is back and I'm glad they're finishing out the year in that room we know and love.

More like this
Lea Michele Recalls The Moment She Found Out She Was Cast In 'Funny Girl'
By Radhika Menon
Netflix Reveals First Look At Wednesday In The 'Addams Family' Spinoff Series
By Bustle Editors
Kenan & Kel Just Reunited At The 2022 Emmys & Twitter Is Overjoyed
By Grace Wehniainen
15 Offensive AF Jokes In 'Friends' That Really Aren't OK
By Tolly Wright, Bustle Editors and Meguire Hennes
Get Even More From Bustle — Sign Up For The Newsletter