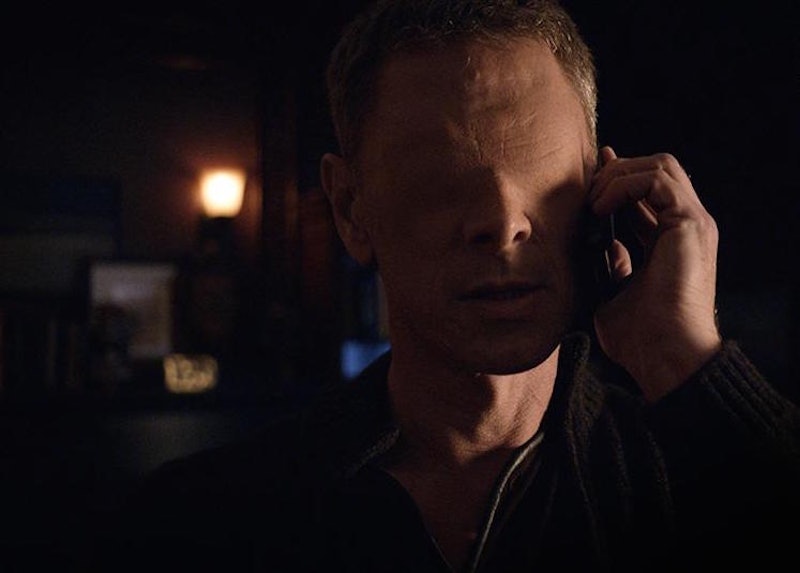 As if Marvel's Agents Of S.H.I.E.L.D. midseason finale, "What They Become," didn't have enough action packed into its 43-minutes, the show found time for one last twist in the stinger before the credits: viewers were introduced to an eyeless man in possession of a second Diviner. It's the oldest trick in the serialized television book: as soon as you solve one mystery, you have to introduce another. We finally know who Skye is (Daisy Johnson, aka Quake), but now we're left wondering who this mysterious sight-impaired fellow might be. And we won't even find out for three months, since Agents of S.H.I.E.L.D. is on hiatus until March!

Thankfully, when anything mysterious happens on a sci-fi/fantasy/comic book series, you can count on the major fans of the world to unite in the pursuit of solving said mystery — and they certainly didn't fail us this time. The prevailing theory on the internet is that the eyeless man is an Inhuman known as The Reader. Doesn't ring a bell? Don't worry, The Reader isn't exactly The Incredible Hulk. In fact, he was just introduced in the comics very recently — which actually lends credence to this theory. We all know how good Marvel has become at synergy across all its platforms (film, TV, comics); it was only a matter of time before they started introducing new characters on the page and the screen simultaneously.

So who is The Reader? Like Skye (sorry, I guess we have to start calling her Daisy), he is an Inhuman. This is obvious on the show as well, since he's in possession of another Diviner just like the one that transformed SkyeDaisy and Raina, and it's glowing with the alien glyphs that only appear when it comes in contact with Inhumans. In the comics, he was a human with unknown Inhuman heritage whose latent powers were activated when a bomb containing Terrigen Mist was detonated in the Earth's atmosphere. He has the ability to make anything he reads become real. This power proved to be too potent, so the Inhumans blinded him. (Or completely erased his eyeballs, apparently.)

Since losing his power, The Reader has made it his mission to seek out other Inhumans with newly-activated powers. This parallels the eyeless man's words, who mentions that he senses "something new" (Skye and Raina's metamorphosis?) and that he's "on it" (going to find them?). If it is indeed his mission to find SkyeDaisy and help her learn to harness her new powers, then this character will likely prove to be a huge presence in the second half of the season.

Of course, this is technically still a theory and could turn out to be totally wrong. Maybe the other prevailing theory is the correct one and the eyeless man will turn out to be this creepy dude's brother:

He still gives me the heebie jeebies, you guys, not gonna lie. *shudder*