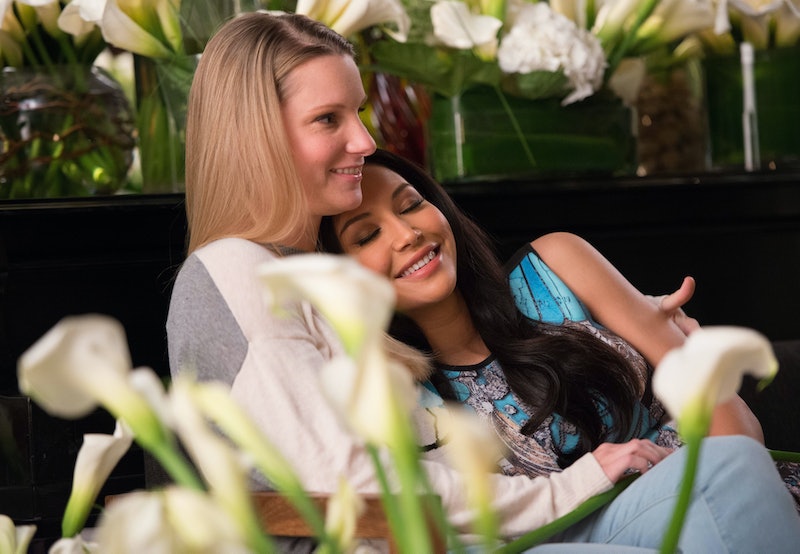 Look, there'a really only one big question that I care about Glee answering in their final season. Is Brittana endgame? I know the premise of the show is that it's basically the Rachel Berry story, and that's fine. But ever since Santana Lopez and Brittany S. Pierce's relationship was introduced as an idea, I've watched the show for them. So imagine my excitement when the promo for Glee Season 6 showed Brittany and Santana hugging it out. Rivera's sassy Santana and Morris' doe-eyed Brittany are two of the best characters on the series, and they deserve their happy ending.

Now that Morris has rejoined the cast full-time after having a baby, it seems like both ladies are finally in the same place at the same time. Fans have been teased for years now with the back and forth of their relationship. It was always clear they both loved each other, but they went to different colleges and eventually broke up. There was a brief glimmer of hope during the 100th episode which kind of had them get back together, but then nothing more for them was written that season.

Needless to say it's been rough-going loving this couple, and Season 6 needs to give them the resolution they and their fans deserve. Here are seven reasons why Brittana was always meant to be.

Their Relationship Was Born Out of Fan Love

Originally, Santana wasn't written to be gay. But fans started picking up on the fact that Rivera and Morris were best friends in real life and noticed how that made for perfect on screen chemistry. The two of them started out as background characters and so in their scenes they'd often be fooling around as best friends do.

Fans noticed and loved it, and fortunately the writers listened and wrote them an actual story line. It's possibly the only fan-created relationship on the show and as such deserves special attention.

Brittany Brings Out the Best in Santana

I love bitchy Santana, but I also think it must be exhausting for her to have to stay on her toes like that all day. She's the most herself when she's with Brittany. She's not trying to think of insults or acting bored with the world, she's just allowed to relax and I think that's really important in a relationship.

Santana Appreciates Brittany for More Than Her One Liners

Yes, Brittany is known for her dumb jokes and lines throughout the series, but to Santana she is so much more than that. Santana saw her intelligence before anyone else did and she made sure to tell Brittany that she was smart. They easily have one of the healthiest relationships on the whole show.

They've Had a Rough Road

It's been such a struggle for them as a couple. Dating other people, trying to come out of the closet, trying to do long distance, dating other people again... yikes. It's been a long road to get these ladies to where they are today but they're stronger for it and their relationship will be, too.

They've Always Loved Each Other

And they always will, so ending up together just makes sense.

They've Helped a Lot of People

LGBT representation is so important. Even if you're told that being gay is OK, if you have nowhere where that's visually represented, it can be hard to believe it. As someone who struggled with her sexual identity in college right around the time this story line was introduced, I can tell you I used to walk away from the episodes in tears because it was such a relief to see that being a lesbian could be normal. Seeing Brittana treated with respect by the writers gave me hope that maybe I could also have that kind of love some day.

But not only did Glee show the happy relationship side of the story, they also showed the realities of it. It was nice to see Santana struggle with coming out of the closet because not every one can leap into the gay beyond like Blaine and Kurt. Seeing a character who struggles just like you is beyond amazing when you're going through an already difficult time. Now to see Brittana get a resolution would mean the world to me and other fans who drew inspiration from the relationship.

"The fans love Brittana so much, and I really think we should give them something sweet and wrap it up in a nice way,” Rivera said of the final season. Hopefully she has some sway with the writers and can help get Brittana their own happily ever after because if anyone deserves love, it's these two.