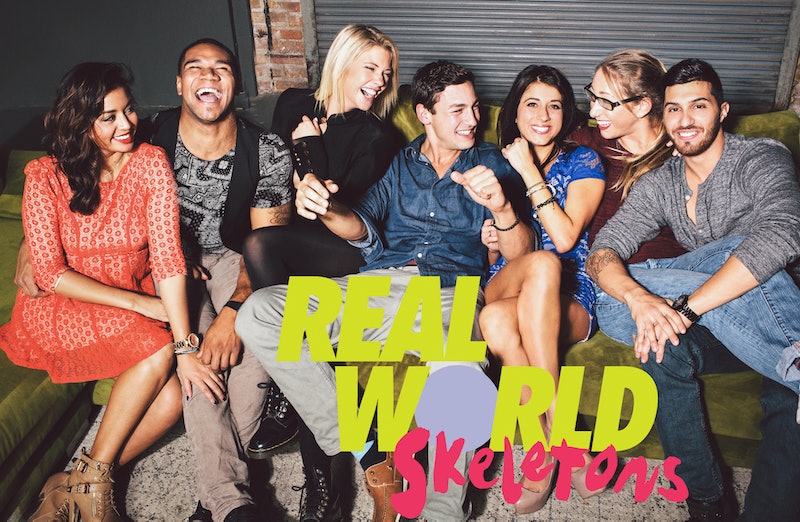 The Real World franchise has now existed for 30 seasons, With the premiere of Real World: Skeletons. Thirty. Seasons. For over two decades, seven strangers have been picked to live in a house, work together, and have their lives taped. And though the show has largely slipped into irrelevancy, it still manages, on occasion, to be gross or awful enough to claw its way back into the pop cultural conversation. And who am I to stand in the way of that dialogue? I'd rather do my part by shedding some light on the downfall of taste that is Real World: Skeletons (aka The Travesty of the Millennial Age — But Hey, Look at These Hotties!).

So let's get to it. What's so terrible about The Real World? Well, to answer that question, we first need to acknowledge that, back in 1992 when this thing first got started, the show was actually pretty revolutionary. It was one of the first reality programs ever (so Bravo, you better send MTV a very nice holiday card this year). And, at least at first, it featured interesting people and promoted conversation about important topics. Real World has included an HIV-positive cast member (a huge deal in 1993); women who have spoken openly about their abortions and their struggles with self-harm; and a gay housemate who dated an Army captain before Don't Ask, Don't Tell was lifted (the boyfriend's face had to be blurred). Those are all important issues that deserved representation.

Issues not deserving of representation: each current cast member's personal quest to earn the title "Most Awful Television Personality, Like, Ever." I'll save them the time: You all win.

So. Much. Stupid. Drama

Look, I get it. Reality television entertains by creating dramatic, tense situations that usually devolve into fights and tears because hey, we're really not as far removed from our monkey ancestors as we'd like to think. But if that's the way your show is structured, you'd better make sure the audience is invested in your characters first. And that's Real World's first mistake. Viewers were just introduced to the new cast 20 minutes before the first fight breaks out. So why should any of us care who wins?

Of course, the seven new cast members get real wasted their first night in the house. And of course, they all turn into drunken buffoons who (it appears from my observational research) need mouth-to-mouth contact combined with excessive groping every 30 minutes, or they die. But whatever — they're young, they're hot, they're on MTV — it makes sense. What doesn't make sense is the fighting that almost immediately breaks out. The first screaming match starts over the $800 bar tab that these seven people somehow manage to amass in a few hours. I don't even want to do the math on how much each person had to drink to get to that number, but obviously these kids are all on Charlie Sheen's level. When it comes time to pay up, of course there's drama over who drank what. (Side question: Doesn't MTV pay for all this?)

Everyone eventually figures out the tab situation, and they head home. Back in the mansion, housemate Violetta takes the shenanigans to a whole other level. Let me be clear: Violetta is a bad person. Violetta is toxic and she's a danger to those around her. Let's move on. Earlier in the day, Violetta decided that she wants to hook up with Tony. And Tony's into her, too. But he's also into Madison. And he and Madison end up making out.

Violetta is so enraged that a guy she's known for 16 hours is attracted to another human who's not her, she flips out and does one of the least likable things I've seen on this show. She turns to some of her other castmates and, with a big grin on her face says, "Wanna see some drama? Wait for it. Wait for it." She rushes at Tony and Madison, and shouts, "Fuck your stupid-ass slut." She also yells at "Tommy" (yeah, she forgot his name) for choosing another woman over her. Just in case you wanted to hear more of Violetta's appalling verbiage, here are a few of her other choice quotes about Madison: "I'd rather get syphilis" and "I don't deal with roadkill." Can MTV please make this season into the kind of reality show where viewers get to vote members off? I'm begging.

Aside from Tony (who you'll find out is also a scumbag in just a minute), we've also got Bruno and Jason. So far, these three haven't been too interesting (but I'm sure they're just waiting for the perfect moment to reveal their Rhodes scholarships and community service accolades). They mostly just talk amongst themselves about how hot the girls in the house are, and the strategies they'll use to get with them.

Tony already accomplished that goal the first night by hooking up with Madison. But after Violetta makes clear that she's interested as well, Tony decides to keep his options open and comfort Violetta after she calls Madison a "stupid-ass slut," just so he'll have the option of "smashing" Violetta later on in the season.

More like this
What’s New On Netflix: Ana De Armas’ 'Blonde' & A Nick Kroll Special
By Arya Roshanian
15 Piping Hot Behind-The-Scenes Secrets From 'Great British Bake Off'
By Emily Dixon and Darshita Goyal
What’s New On Netflix: Meet 'The Real Bling Ring'
By Arya Roshanian
Confusion Reigns After Kanye Changes His Instagram Profile Pic To Kris Jenner
By Jake Viswanath
Get Even More From Bustle — Sign Up For The Newsletter