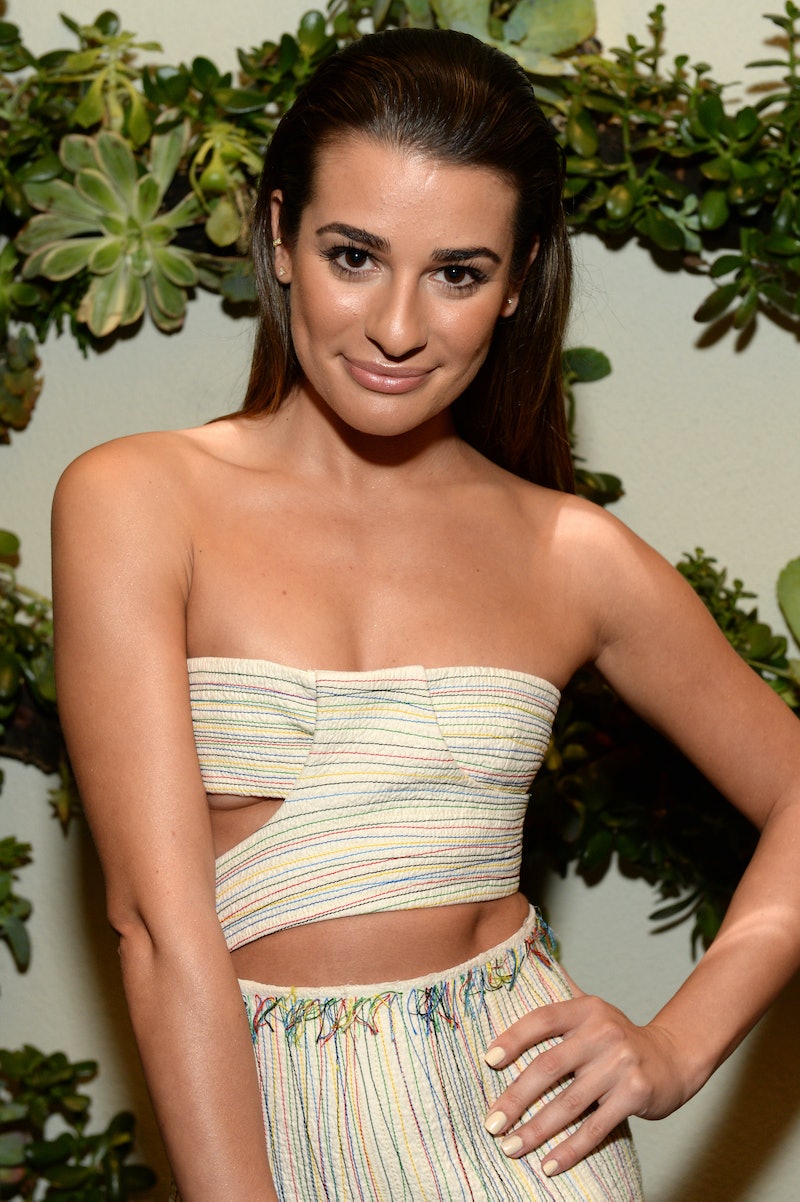 I've always kind of wanted a tattoo, but I have never managed to actually get up the courage to go get one. It's not just my fear of needles holding me back, it's the fact that I have no idea what single phrase, image, or symbol means enough to me that I want it on my body for the rest of my life. And this is where I envy Lea Michele — among the zillions of other things that make her amazing, of course. Michele has never had a problem getting inked up, and now, along with her boyfriend, Matthew Paetz, Lea Michele's added another tattoo to her collection.

There's just one problem: she isn't sharing what her tattoo is, just that she got one. From the picture she posted on Instagram over the weekend, it would appear that it's pretty small — small enough to fit on her finger, anyway — and that she got it done at the Shamrock Social Club in Hollywood by a tattoo artist named Dr. Woo. And that the tattoo hurts. Which, I mean, duh. That would be another reason I don't have all five faces of the One Direction members going down my arm as we speak.

Now, I'm left to wonder — what kind of tattoo did she get? Being that Michele tends to use her body as a walking scrapbook, I can make a few educated guesses. And as it turns out, her Instagram is full of good hints.

Something to Symbolize the end of Glee

Glee is about to begin its final season, and being that it was a huge part of Michele's life, I wouldn't be surprised if she was commemorating the occasion. It's definitely not a star, since she already has one of those in honor of Rachel Berry. Maybe music notes? A microphone? A bust of Sue Sylvester?

Something That Matches Whatever Paetz Got

Although I hope not, because I'm generally not a fan of couple's tattoos. I mean, what happens if you split up?

Vegetables... Or Something Equally Healthy

Michele has been all about eating healthy, and constantly posts pictures of the yummy dishes she comes up with on her Instagram. If she could be my personal chef, I might become a bigger fan of clean eating. And while veggies may not seem like a badass tattoo idea, I could totally see how a tiny stalk of broccoli could be cute.

Michele obviously loves her cats, and as far as I know, she has yet to get ink related to her furry friends. Better late than never!

Monograms are back in, if you've missed out on the news. How cute would a little, fancy, swirly "L" be on Michele's finger?

Something Symbolizing the Outdoors

Homegirl is always outside getting her exercise on. A tree would be cute. Maybe some wildflowers? Fingers crossed they're in watercolor. Watercolor tattoos are the best.