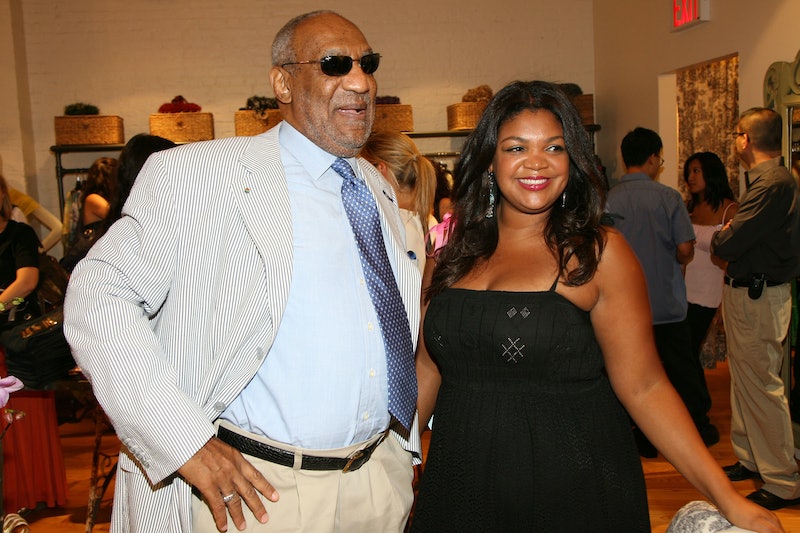 Update: As of the afternoon of Dec. 16, Evin Cosby has deleted a few of her below mentioned Facebook and Twitter posts. As the list of sexual abuse allegations against Bill Cosby continues to grow, the actor hasn't said too much about the subject. Despite this, his family isn't keeping quiet. On Monday, Camille Cosby supported her husband, claiming he isn't the monster portrayed by the media. In a statement, she said, "He is a kind man, a generous man, a funny man, and a wonderful husband, father and friend. He is the man you thought you knew." Similarly, Cosby's daughter Evin Cosby has been defending her dad on her public Facebook and Twitter pages. While I believe everyone is entitled to an opinion — and of course, family comes first — some of Evin's comments probably aren't helping her father's situation. That's because some statements she posted are a bit offensive.

I understand the desire to stick up for loved ones and defend her dad's name. At the same time, I don't think insulting the alleged victims is the best way to go about it. Not only has Evin been retweeting posts that mock the women who have come forward, but she also has thrown some insults their way in her own tweets. She referred to model Janice Dickinson as "Janice Dickhead" and said Beverly Johnson "looked crazy w/a crooked wig" the last time she saw her. Oh, and then she compared the women who have spoken out to a "gang," saying they're an organized group of criminals. While not all of her tweets are negative, the bad tend to outweigh the good.

In addition to Twitter, she's been commenting on the news over on Facebook. Evin responded to Spelman College's recent decision to suspend Bill Cosby's professorship. She is an alum and expressed her disappointment with her alma mater. Evin highlights a past example of false rape claims at the school and writes, "Shame on YOU Spelman. You need to go to Sister's Chapel and ... revisit how many other innocent MEN that have been WRONGFULLY accused!!"

She also called into question the allegations that involved women being drugged by Bill Cosby.

In addition to that, Evin posted about how the media is to blame for manipulating stories.

Echoing similar thoughts, Bill Cosby recently spoke out and made a comment about media bias. Although he hasn't talked much about the actual allegations, he told the New York Post,

Let me say this. I only expect the black media to uphold the standards of excellence in journalism and when you do that, you have to go in with a neutral mind.

More like this
15 Offensive AF Jokes In 'Friends' That Really Aren't OK
By Tolly Wright, Bustle Editors and Meguire Hennes
UK Viewers Will Have To Wait To Watch The Handmaid’s Tale S5
By Maxine Harrison
Megan Rapinoe's Relaxation Hack Is Super Dreamy
By Carolyn Steber
Everything To Know About 'RHONJ' Season 13
By Brad Witter and Jake Viswanath
Get Even More From Bustle — Sign Up For The Newsletter