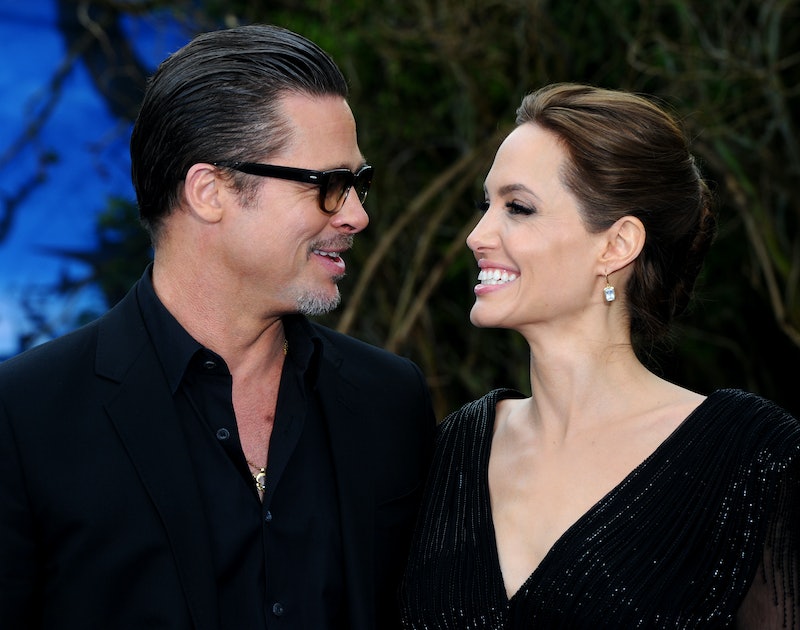 There are a lot of things I love about Brad Pitt attending the Unbroken premiere. In case you haven't heard, Angelina Jolie had to miss out on the big night celebrating her directorial debut because she was at home with the chicken pox. But just because Jolie was too sick to get glammed up and make the event doesn't mean she went unrepresented. Pitt, his parents, and children Maddox, Pax, and Shiloh were all on hand on the red carpet, and close up photos of the fam reveal something kind of adorable: the blue nail polish Brad Pitt wore on his pinkie finger, undoubtedly the result of a recent daddy makeover session at home with his kids.

Because, after all, there's something to respect about a dad who's willing to cross gender norms to make his children happy. Not all dads are cut out for makeup, tea parties, and the inner emotional workings of Barbie and Ken's relationship, but Pitt definitely seems down. In fact, all examples of Jolie and Pitt's parenting prove that they couldn't possibly be a better fit for the job.

And now that I think about it, this is hardly the first time Pitt and Jolie have proven themselves to be awesome parents to their ever-growing brood.

Not a lot of brides would use their wedding dress as a canvas for showcasing their children's drawings, but Jolie totally did — and it turned out incredible. Her veil had her kids' doodles stitched into it, and it looked amazing. Even more adorable was the fact that Jolie and Pitt's vows were written by their children, too.

They make a great team.

One of the things I love most about Jolie and Pitt as parents? They never have a bad thing to say about each other, and if they do, they keep it a secret from the public — and from their children. In an interview with The Mirror, Jolie couldn't say enough wonderful things about Pitt as a parent:

He loves being a father and that’s one thing I’m most proud of about him. With a large family, you need that support. Brad is a wonderful teacher and guide, for the boys in particular. He likes to plan things and proceed in a very deliberate and methodical way. He is much cooler and calmer... I can be more impulsive and outspoken. It’s very reassuring to know there is this very solid and generous man in your life.

When Angelina used Maleficent as a teaching moment.

At first, the Jolie-Pitt kids were absolutely terrified of their mom dressed up as Maleficent, and who could blame them? Those horns in themselves were super scary, especially for a little kid. So how'd Jolie remedy this? She told them the real story of Maleficent , and ended up getting the important point across that even when people are mean, they're still people — and maybe all they need is a little understanding. A complicated point for a kid to grasp, but Shiloh understood well enough to get into a fight with another kid about the finer points of the story. Boom. Parenting.

When they bought Shiloh graffiti lessons.

Not everybody is lucky enough to grow up with super supportive parents, but it seems that Pitt and Jolie's kids have won the jackpot in that way. When Shiloh showed interest in learning how to do graffiti, Jolie had no issue buying her graffiti lessons for her birthday. Hey, it's only illegal if you don't ask to use your canvas first. And also, I'm kinda jealous.

More like this
The Chicest ’90s Updo Hairstyles To Try
By Paris Giles
What Does Nancy Jo Sales Think Of 'The Real Bling Ring'?
By The Editors
Twitter Is Unravelling Over Wolverine’s Return For 'Deadpool 3'
By Darshita Goyal
The Spice Girls Just Dropped A Brand New Music Video
By Sam Ramsden
Get Even More From Bustle — Sign Up For The Newsletter