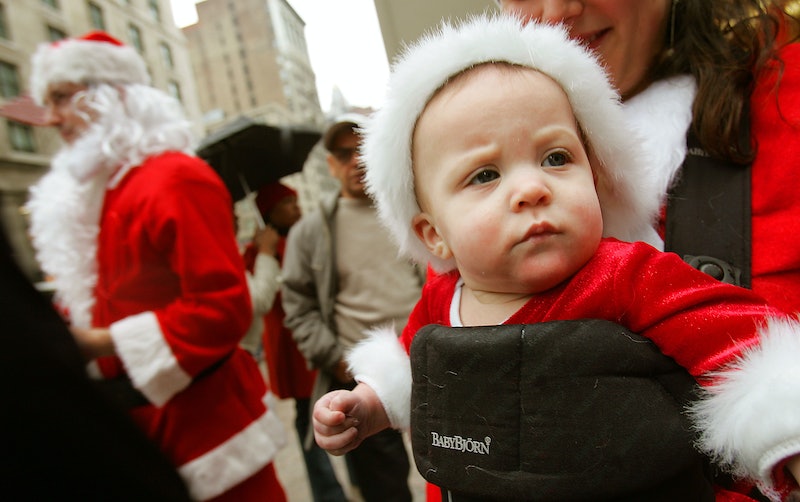 'Tis the season — the season for Christmas songs on repeat, amirite? We're right smack in the midst of the holiday season, which means that regardless of denomination, you're probably having a hard time avoiding all those classic holiday ~tunes~ if you spend literally any time near a radio or TV. One of those songs that is always, always present ones is "Santa Baby," ranking near "Baby, It's Cold Outside" in the halls of flirty/suggestive holiday songs you will never not hear come winter. This also means that "Santa Baby" is one of those ones that will repeat so frequently during the weeks between Thanksgiving and Christmas that you might at some point be convinced that you are going insane.

Eatha Kitt, Taylor Swift, Kylie Minogue, Naya Rivera, Madonna, Arianna Grande, Ally McBeal, RuPaul, Shakira, Macy Gray, Kellie Pickler, Mariah Carey — the list of people who have "tackled" this classic song is nearly endless, and thus so are the number of voices you will hear crooning it out of your car's speakers every year.

My relationship with Christmas music tends to go through a few different stages throughout the crucial weeks in the end of November and the bulk of December. It starts out friendly and by approximately Christmas, it's descended into madness.

Oh, this song is fun!

Admit it, there's some part of you that wants to sing this coquettishly to someone.

Is this person assigning the name "Santa" to a lover in their real life, or are they insinuating that they've been having an affair with Santa all this time? How scandalized am I supposed to be about this? Are Santa and Mrs. Claus in an open relationship? Or is Mrs. Claus the one... singing?

And why did Michael Buble feel the need to change "baby" to "buddy," "pally," and "dude?" Is it just me or is this the biggest "NO HOMO" in all of holiday music history?

Worry over the singer's financial state

There's just a lot of desperation up in here.

1) "Side-eye" is definitely an emotion. 2) The singer of this song is the most demanding person I have ever encountered. They're threatening Santa Claus with the withholding of their wiles. Literal Santa extortion.

I mean. The song is catchy.