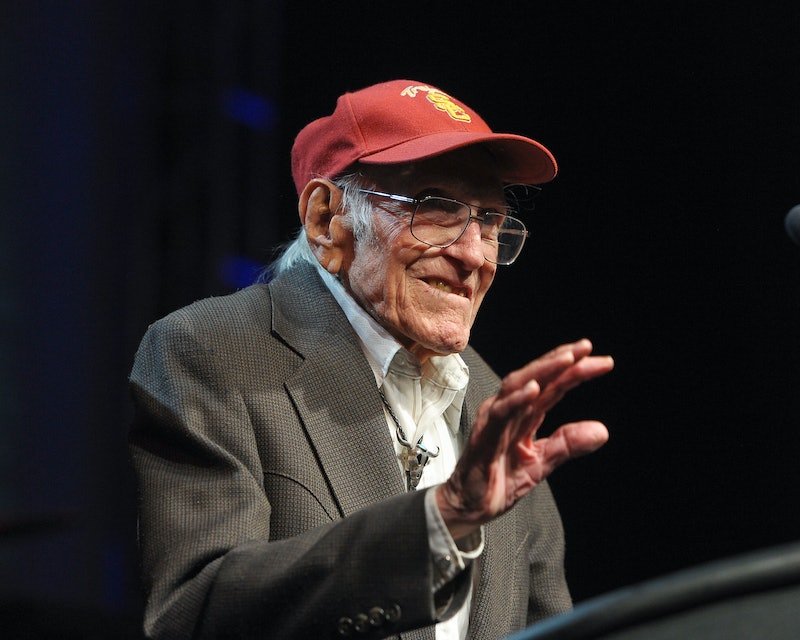 Angelina Jolie's newest film Unbroken has been getting the attention it deserves from critics, although unfortunately not from the Golden Globes for her masterful directing, but that's neither here nor there. The film, directed by Jolie and adapted by the Coen Brothers from the book Unbroken by Laura Hillenbrand (a lot of great minds on this project), tells the incredible story of human strength and tenacity displayed by one Louis Zamperini. Zamperini was a wayward kid turned Olympic track champion turned World War II soldier that survived a plane crash and was held as a prisoner of war in a Japanese camp for two and a half years. Yikes — that's a mouthful. It's a harrowing and difficult tale of what the human body and soul can endure, and Zamperini is portrayed reverently by actor Jack O'Connell.

But what does the real Zamperini look like? Very unfortunately, the hero and all-around fascinating Louie Z. passed away earlier in July of this year. Though Jack O'Connell gives us an idea what the young Louis might have looked like, it's always better to see the real thing. One of the most thrilling parts about biopics is putting a true story depicted on the screen to the face of the real hero that it honors. Here are some shots of the late, great Louis Zamperini.

In this retrospective interview with Time, we can not only see a photo of Zamperini, one of the youngest Americans to qualify for the Olympics, but an interview with him about the best advice he ever received from his big brother. Zamperini says, "That's what's good about sports— you don't give up. You fight to the finish."

On the cover of his own book about overcoming life's seemingly unscalable obstacles.

Man on the Run

A photo of a lithe, lean Zamperini in his track days.

After the war, Zamperini met Evangelical preacher Billy Graham, and gave up drinking to devote himself to the church. (Zamperini's on the far right, Graham is third from the right).

A wonderful interview with director Jolie, Zamperini and Tom Brokaw.

His athletic uniform, that is. So handsome!

Unbroken premieres next week on Christmas Day. You can watch the inspiring trailer here.