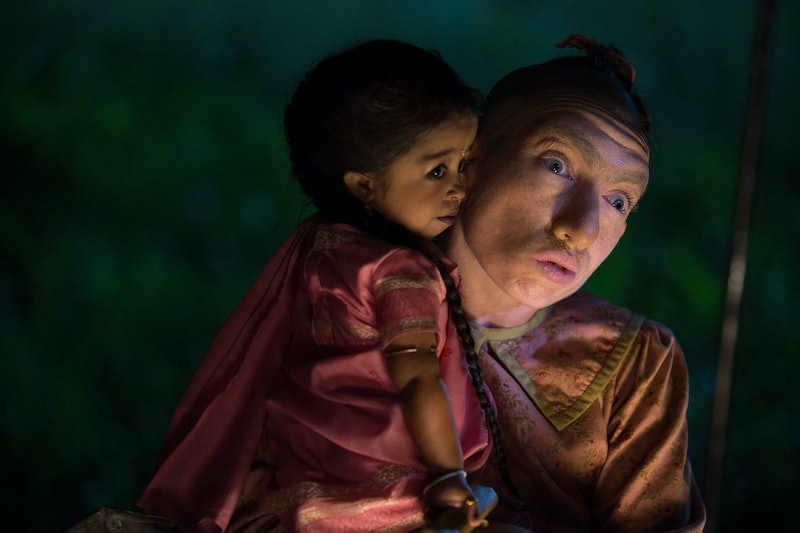 It's all coming together, people. The upcoming episode of American Horror Story is finally connecting the universes of Freak Show and Asylum, and considering all the hype surrounding the twist, this better be one hell of a show. And it should be: Sister Mary Eunice (portrayed once again by the Lily Rabe) is finally meeting Pepper (Naomi Grossman, who has reprised her role from Asylum all season long) which means that we'll finally be seeing some of Pepper's backstory. We already know a little bit about Pepper's past from both Asylum and Freak Show , but the introduction of Sister Mary Eunice will help bridge the gap — and maybe answer some of the questions we've had about Pepper since we saw her picking flowers outside of Briarcliffe.

For those of you who don't remember Pepper's introduction into the American Horror Story universe, let me refresh your memory. Lana Winters is greeted by the friendly Pepper, and, moments later, is warned by Sister Mary Eunice about the asylum resident. According to Sister Mary Eunice, Pepper drowned her sister's baby and cut off his ears. Pretty unsettling stuff, right? But the crime may not be Pepper's fault at all.

Towards the end of Asylum, Pepper is gifted with a high level of intelligence by the aliens who visit Briarcliffe. It's then that she explains that she never murdered her sister's baby at all — she was framed by her sister's husband, because, as she puts it, that's how it works for "freaks" — they get blamed for everything.

American Horror Story: Freak Show takes place several years earlier than Asylum, which means that it is likely for us to see the murder of Pepper's sister's baby and her lock up in Briarcliffe. But it seems odd for Sister Mary Eunice to show up seemingly before those events have occurred if she has the intention of bringing Pepper to the asylum. Perhaps, despite popular belief, Sister Mary Eunice isn't necessarily there on the bidding of Briarcliffe — maybe she goes to Elsa Mars' freak show to connect Pepper back to the family she lost.

My theory? Pepper's sister sends Sister Mary Eunice to the freak show to bring Pepper home. Unfortunately, her sister's husband — the one who allegedly murdered the child — isn't happy to have her in his house. He then kills the baby and uses the murder as an excuse to send Pepper away. That's how Pepper could jump from the freak show to her sister's home to Briarcliffe. "Freaks" are blamed for everything, and Pepper is the prime example of how prejudice has the power to ruin lives.

More like this
‘Squid Game’ Creator Hwang Dong-Hyuk Just Dropped A Major Season 2 Tease
By Brian Anthony Hernandez and Bustle Editors
This House of the Dragon Character Will Create Another Scandal For Rhaenyra
By Kadin Burnett
Nicola Coughlan Shared A Lady Whistledown Excerpt From ‘Bridgerton’ Season 3
By Grace Wehniainen, Alyssa Lapid and Sam Ramsden
Devi Is Going To Meet A “Smoldering Bad Boy” In ‘Never Have I Ever’ Season 4
By Jack Irvin and Gabrielle Bondi
Get Even More From Bustle — Sign Up For The Newsletter