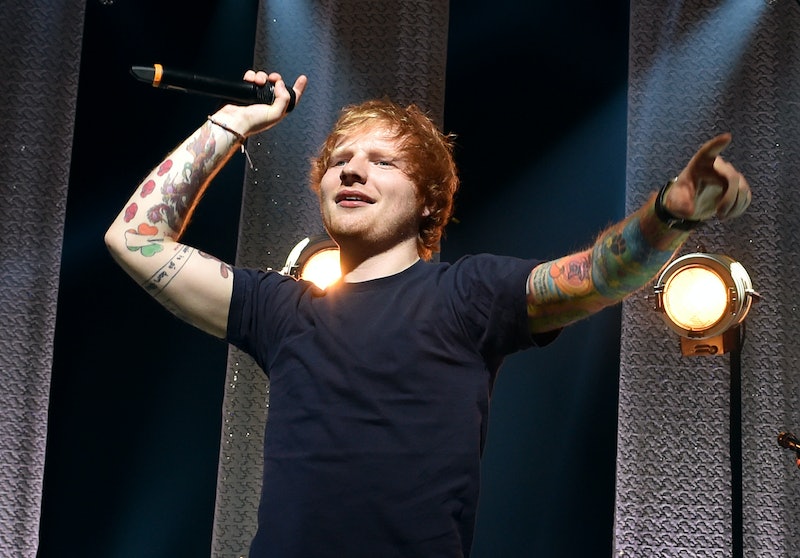 In case you missed it, Ed Sheeran's performance on The Voice finale was so flawlessly broken down that it undoubtedly broke a couple thousand hearts across America Tuesday. Unsurprisingly, the English singer-songwriter was invited back to the Voice stage for the Season 7 finale to perform his newest album's third single "Thinking Out Loud" and it was easily the best performance of the night. The British phenomenon sounded a little raspier than usual, but if this is what Ed Seeran sounds like when he's sick, I selfishly think he should be sick more often.

Tuesday marked The Voice finale and for the first time ever, four unbelievably gifted artists have a shot at the title. But although the 13-week Emmy-winning singing competition added many firsts for this finale, like four finalists and a Wildcard pick, one thing stayed consistent — a stunning performance by Ed Sheeran. Ed is certainly no stranger to the Voice stage. The red-headed heartthrob was amongst some of the greatest Voice mentors when he consulted for Team Christina during Season 5's battle rounds and gave the contestants irreplaceable advice. Then the 23-year-old returned once again last season for a stunning live debut of his smash hit "Sing" as well as a second show-stopping duet with Team Adam's Christina Grimme.

With so many worldwide hits this year, it should come as no surprise that this ginger cutie is up for three Grammy Awards in 2015. To follow such incredible artists like Bruno Mars, Lynyrd Skynyrd and Jennifer Hudson is no easy feat as it is. But to do so as stoically as Ed Sheeran does — without any added production like over-the-top sets, crazy lights or an ensemble of sexy dancers — is nearly unheard of. The stars didn't hurt, though.

Live videos of these epic finale performances will be available shortly.

More like this
Everything To Know About Taylor Swift’s 10th Studio Album, 'Midnights'
By Grace Wehniainen and Jake Viswanath
Taylor Swift Wants To Direct A Movie Next — But You Might Have To Wait
By Radhika Menon
Jason Derulo Is Launching A New Singing Show In The UK
By Maxine Harrison
18 Years After 'American' Idol, Jennifer Hudson & Simon Cowell Reunited On Her Talk Show
By Radhika Menon
Get Even More From Bustle — Sign Up For The Newsletter